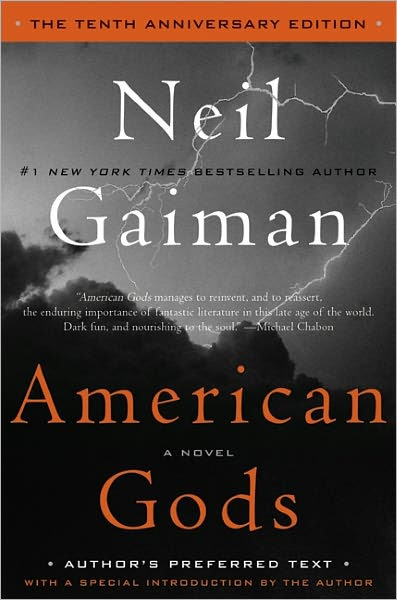 . Not many novels have their anniversaries celebrated and so I couldn't resist reading it right now (not to mention the number of times that it's been recommended to me by many of you readers when I show it on my TBR list). Now that I've finished, I can definitely understand the celebration of this novel as an essential piece of the American literary canon.

Shadow is a convict, getting ready to finish his sentence and head home to his beautiful wife. He ends up being released early though due to his wife's accidental death, and on his way home he is approached by a mysterious older gentleman who calls himself Mr. Wednesday. Soon after, Shadow is working for Wednesday and moving back and forth across America, meeting other strange characters and discovering that the new world may have more ties to the old than he ever could have believed.

There were parts of this story that were difficult to read because of their graphic nature (violent and sexual). There were other parts that were uplifting and beautiful. The characters (including many gods, as you can guess by the title) were fascinating and diverse. I couldn't put this one down and I was constantly amazed by the way that Gaiman pieced together so many myths and histories in a subtle and seamless way. When I started the book, I wasn't even sure I would like it but, by the end, I was convinced that it is the kind of novel that changes you as you read it. It won't change your beliefs but rather will cause you to question if you should believe or not. I plan to brush up on world mythologies and then to read the anniversary edition of this novel which is longer and is Gaiman's "preferred edition". There will be a live webchat with Neil Gaiman about the novel on June 21st (I don't see a time listed yet but will update if I find one), the day the anniversary edition is released.

This is another of my reads for the Once Upon a Time V Challenge.


Support our site and buy American Gods: The Tenth Anniversary Edition: A Novel

on Amazon or find it at your local library. We bought our own copy of this novel.
Posted by Kristen M. at 12:17 AM