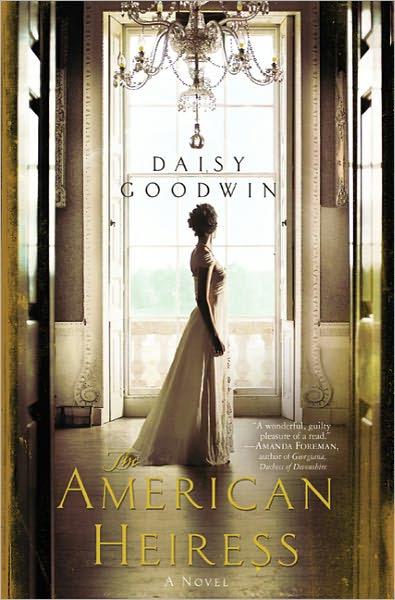 I read The American Heiress by Daisy Goodwin a few weeks ago and it was alright. I know that's not the highest praise and probably won't get you to rush out and pick this one up but I unfortunately can't say I felt strongly one way or the other about it. It was a good-enough story with a few flaws that made for a fun read but fell short of being a must-read.

This is the late Victorian story of an American heiress, Cora Cash, who ends up doing what many other similarly-endowed girls of her generation did -- marrying her money to a British title. But Cora is soon suspicious that her husband, Ivo, the Duke of Wareham, might have married her only for her money when she actually married him for love. Cora is forced to navigate the tricky world of the British aristocracy to find out if her marriage is worth saving and if she is really cut out to be a Duchess after all.

The quote on the back of the book likens this book to the works of Edith Wharton and Jane Austen but it is most definitely more in the vein of Georgette Heyer -- a romance with a cast of outrageous characters, a small amount of social commentary, a boatload of misunderstandings and a readability that is always welcome in the doldrums of summer. There were a couple of strange plot hints that could have turned this into a darker, more weighty book but those strings were never picked up and the book remained lighter in tone, even with Cora's constant angst. She reminded me quite a bit of Du Maurier's unnamed heroine in Rebecca because of her unintentional gaffes and her longing to simply feel the love of her husband. And yet she is different, having come from a life of extreme wealth where she has never had to fight for anything. Because of this, I had trouble connecting with the character, which might have contributed to my ambivalence about the novel. Still, there is nothing glaringly wrong with the book and I would recommend it if you are interested in a light period read.


Support our site and buy The American Heiress on Amazon or find it at your local library. We received an Advance Readers' Edition from the publisher.
Posted by Kristen M. at 12:04 AM