New Release: Killed at the Whim of a Hat 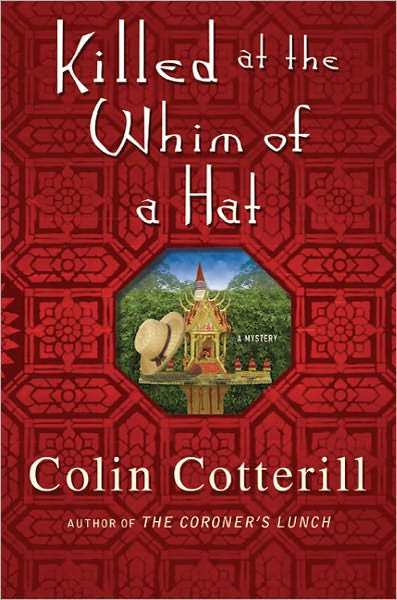 Killed at the Whim of a Hat is the first book in a new mystery series by Colin Cotterill. It features Thai crime reporter Jimm Juree and her family (grandfather, mother, brother and brother-turned-sister).

I had a bit of a problem hearing Jimm's voice at the beginning and wasn't entirely sure that she was, in fact, a woman but once I settled in with the character, I was amused and informed by this unique look at the ocean communities of Southern Thailand. There are two mysteries in the book, both interesting, but the biggest mystery is probably the title of the book. It turns out that it's taken from that inexhaustible list of gaffes known as "Bushisms" -- yes, the brilliant words of wisdom of our previous president. Each chapter is prefaced with a Bushism and, while not everyone will find that funny, well, it is.

There was a lot of ground covered in this story--politics, rural community dynamics, gay and transgender issues, religion, press tactics and more--so it's just a taste of Thailand that will please most readers. It will be interesting to see if Cotterill tries to tackle so many subjects at once in his next outing with Jimm Juree.

''I'll be long gone before some smart person ever figures out what happened inside this Oval Office.''
-- President George W. Bush, Washington, D.C., May 12, 2008


Support our site and buy Killed at the Whim of a Hat on Amazon or find it at your local library. We received an Advance Uncorrected Proof from the publisher.
Posted by Kristen M. at 12:23 AM