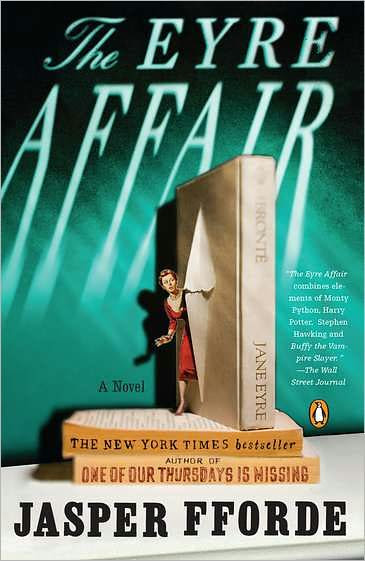 Ten Things I Love About The Eyre Affair

1. The breeding of extinct animals as pets.

"I ... took Pickwick for a waddle in the park. I let him off the leash and he chased a few pigeons before fraternizing with some feral dodos who were cooling their feet in the pond. They splashed excitedly and made quiet  plock plock noises to one another until it was time to go home."

2. A world where there are still airships.

"I took a small twenty-seater airship to Swindon. It was only half-full and a brisk tailwind allowed us to make good time. The train would have been cheaper, but like many people I love to fly by gasbag."

"--SpecOps-17: Vampire and Werewolf Disposal Operations. Suckers and biters, they call us. ... By way of explanation he tapped a mallet and stake that were clipped to the mesh partition." 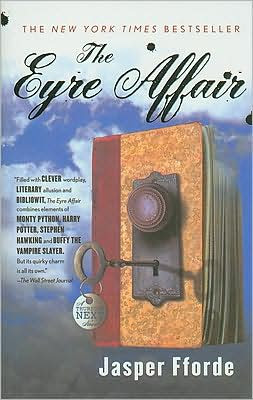 "'Does the GSD encourage such blatant personal attacks?' I asked.
Joffy shrugged.
'Sometimes it does and sometimes it doesn't,' he answered. 'That's the beauty of the Global Standard Deity--it's whatever you want it to be. And besides, you're family so it doesn't count.'"

"His voice sounded the same. The warmth and sensitivity I had once known were still there. ... He had gone slightly gray but he wore his hair in much the same manner. There were slight wrinkles around his eyes, but they might just as easily have been from laughing as from age."

"'We'll start with a plain piece of paper, then put in a Spanish carbon, a second slip of paper ... then a Polish carbon, more paper, German and another sheet and then finally French and the last sheet ... there.' ...
'Write something on the first sheet. Anything you want.'
'Anything?'
Mycroft nodded so I wrote: Have you seen my dodo?
'Now what?'
Mycroft looked triumphant.
'Have a look, dear girl.'
I lifted off the top carbon and there, written in my own handwriting, were the words: ¿Ha visto mi dodo? 'But that's amazing!'"

"He led me around one of the desks to where Bowden was sitting bolt upright, his jacket carefully folded across the back of his chair and his desk so neat as to be positively obscene." 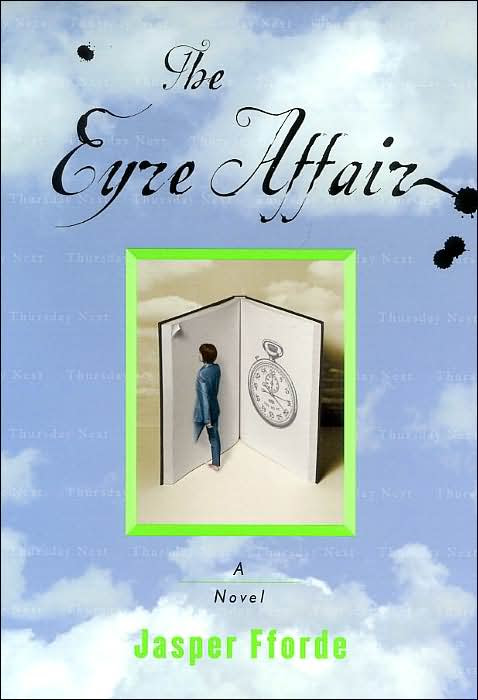 "It certainly looked impressive, but not all Mycroft's devices had a usefulness mutually compatible with their looks. In the early seventies he had developed an extraordinarily beautiful machine that did nothing more exciting than predict with staggering accuracy the number of pips in an unopened orange."

"He silenced the dog with a shout and then stopped to feel his leg; it was obvious that he had hurt it quite badly. I felt sure that a man of such dour demeanor must surely be very angry with me, yet when he espied me again, he smiled kindly and gave me a broad wink, placing a finger to his lips to ensure my silence. I smiled back, and the rider turned to face the young woman, his brow furrowing once more into a grimace as he fell back into character."

"I opened the drawer of my desk and pulled out a small mirror. A woman with somewhat ordinary features stared back at me. Her hair was a plain mousy color and of medium length, tied up rather hastily in a ponytail at the back. She had no cheekbones to speak of and her face, I noticed, had just started to show some rather obvious lines."

What is your favorite thing about The Eyre Affair? Have I convinced you yet to give this book a try? (If you've read it recently, leave a link to your post about the book!)


Support our site and buy The Eyre Affair on Amazon or find it at your local library. I bought my own copy of this book and have put it to good use!
Posted by Kristen M. at 12:10 AM