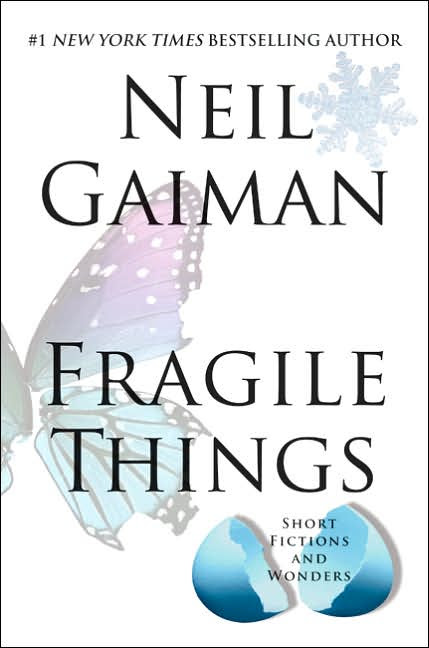 From Carl of Stainless Steel Droppings:


There are 32 short stories in Fragile Things, counting the introduction. Those of you who have read a Neil Gaiman short story collection know that it is a special treat to read the introduction. Not counting Sunday, September 4th (because that is almost upon us), there are 8 Sundays during the R.I.P. Challenge (Sept 1 through Oct 31st). The plan will be to read 4 stories per week and post about them on each Sunday throughout the challenge. The Fragile Things reading will officially begin on September 1st and this first week will include the:
Introduction, A Study in Emerald, The Fairy Reel and October in the Chair.
We will post about these stories on Sunday, September 11th.

My goal is to read only one story a day and write about it that same day so that I can really give a good amount of thought to each piece (we'll see if that happens!). This was the first of Neil's writings that I read in October 2008 (brief thoughts) and I'm guessing that, now that I know him and his style better, I will have different views on some of the pieces (although I will probably love many of the same ones!).

I placed my hold again at the library but then thought that, since this is a second reading, I would just try to find a good copy of the book to own. I was very lucky to find a used hardcover with the beautiful cover above that looks as if it has never been read! So, without further ado, let's start with --

In about 20 pages, Neil Gaiman visits the circumstances behind all of the pieces in the book -- whether they were written for anthologies or gifts, in a brief flash of inspiration or after years of aging in a box in the attic. There's even a short story within the introduction that couldn't find a home elsewhere. What I've found most interesting about Gaiman over the past few years of reading his blog is that he is able to relate the smallest things in life in a way that makes it all seem magical. I think that it's because he believes in the magic of everyday life. You may be doing something mundane or run-of-the-mill but that doesn't change the fact that you are the only person doing it at that moment, in that place, in just that way. I think this is one of the "fragile things" that Gaiman tries to define in the introduction to this collection.


"I believe we owe it to each other to tell stories. It's as close to a credo as I have or will, I suspect, ever get."

"Stories, like people and butterflies and songbirds' eggs and human hearts and dreams, are also fragile things, made up of nothing stronger or more lasting than twenty-six letters and a handful of punctuation marks. Or they are words on the air, composed of sounds and ideas--abstract, invisible, gone once they've been spoken--and what could be more frail than that? But some stories, small, simple ones about setting out on adventures or people doing wonders, tales of miracles and monsters, have outlasted all the people who told them, and some of them have outlasted the lands in which they were created."

A STUDY IN EMERALD

As a marriage of Sherlock Holmes and H.P. Lovecraft, this story is pretty straight-forward. There are beasts in caves and the world has been ruled by tentacled monsters for seven hundred years. And, of course, there are mysteries to be solved and Sherlock Holmes is still on the case. And this story proceeds in a fairly predictable manner -- until right before the end when something rather shocking is revealed and it elevates the story to a whole new level. I remember feeling this same way the first time I read the story but somehow had forgotten the twist. I find that the "fragile things" in this story are one's assumptions.

This is a poem of regret at a foolish choice made as a youth. It's simple and sad but also a bit sterile somehow. I'm hoping that other readers have something more to say about it.


OCTOBER IN THE CHAIR

This story is quintessential Gaiman. The voice, the topic -- it's exactly what you get in novels like American Gods and The Graveyard Book. In fact, this story was born of the same idea for The Graveyard Book and it shows. It's an archetypal sort of story but at the same time it seems entirely unique. He personifies the Months in such a way that you can actually see them sitting, together in a wood around a campfire, telling stories and bickering. In fact, I went searching to see if the story happened to exist online and came across these illustrations (by artist Mike Sgier) of April and June and these of May and October (from the Tumblr called Pochemuchka) and they are just as I imagined them -- showing that Gaiman's storytelling is so vivid that most readers will actually see these characters the same way in their minds. And the part of the story about a young boy who feels unloved and runs away from home is heartbreaking. I can't recommend this story enough if you want a small taste of Neil Gaiman's work.

I'm already glad that I decided to participate in this group read. I'm experiencing these stories in a different way than I did the first time, especially October in the Chair which I could barely remember but now wanted to read again immediately. This is going to be a wonderful journey.