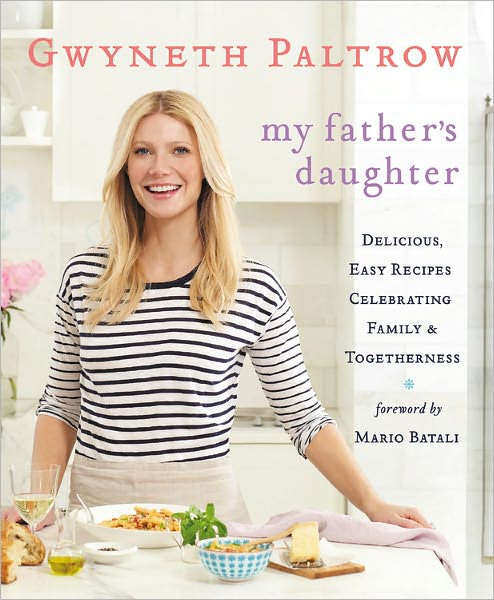 Sometime, in all of the flurry and confusion of the holidays, I won a book on Twitter from Grand Central (an imprint of Hachette). All I knew was that it was Gwyneth Paltrow's new book. I thought it was a memoir (because apparently I didn't bother to read the subtitle) and though I rarely read memoirs, I kind of love Gwynnie so I thought it would be okay. Imagine my surprise last week when the book arrived and I realized it was a cookbook -- My Father's Daughter: Delicious, Easy Recipes Celebrating Family & Togetherness.

Though you may remember Gwyneth's macrobiotic phase, she has since returned to more normal dining choices, only avoiding red meat. But in this book, she not only celebrates the food that she makes for and with her children, Apple (who is one day younger than Z) and Moses, but she tells some of why she went macrobiotic during her father's fight against cancer (he passed away almost ten years ago). She tells many stories about cooking or eating with her father, her mother, her adopted family in Spain and her grandparents. It's very sweet and very down to earth. She offers some healthy alternatives for sweetener (ie. agave syrup) or bacon (turkey or duck bacon) but also allows for the more regularly accessible choices in her recipes. Since she doesn't eat red meat and Apple is vegetarian, she has mostly vegetable, seafood and poultry recipes. There are also some delicious looking breakfast and dessert recipes.

The photographs in this book are gorgeous and there are pictures for maybe a quarter of the recipes. There are also some beautiful family photos from her childhood and even some with her kids (though very few that show their faces). And Gwyneth isn't afraid to have less than glamorous photos in the book -- in one you even see a bra strap! That's my kind of gal.

I always like to make something from a cookbook before reviewing it to make sure that it's not a chef's cookbook. Last night, I chose to make Maple-Dijon Roasted Winter Vegetables to go with our steaks. I used carrot, sweet potato and butternut squash. They are cut into strips tossed with a dijon mustard/pure maple syrup/oil/salt/pepper mix and baked for a relatively short amount of time. This is what they looked like before baking. Just the colors were enough to raise my mood! 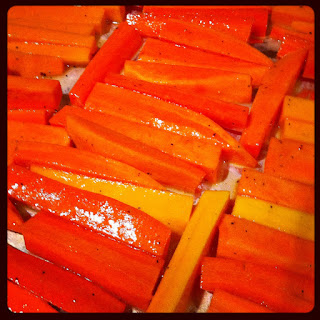 So how did they turn out? Absolutely delicious. I happen to strongly dislike dijon mustard (and I considered using mustard powder instead) but chose to go for the full flavor and I don't regret it. Z isn't a big fan of squash or sweet potato but he ate a good amount of both. The only thing was that I wished there had been a little more caramelization because those parts were super delish!

What else am I looking forward to making from this cookbook? There's a miso soup recipe that looks really simple and delicious. I always enjoy eating it when we're out but have never made it at home. I will definitely try the corn chowder and the polenta with fresh corn this summer. And the Spaniard in me has always wanted to make paella but I don't like most seafood so I'm very happy that she has a vegetable paella recipe. But probably the next thing I will make are Bruce Paltrow's World-Famous Pancakes. With a bit of sugar and buttermilk and an overnight set-up, I expect greatness. I am really so happy to have this book and I will read it regularly for the anecdotes as much as the recipes.