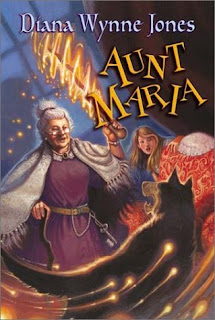 Aunt Maria, from what I can figure, was the thirteenth Diana Wynne Jones books I read. I don't know why I didn't blog about it in 2009 but I did mention it in my Journey post during DWJ Week in 2010. Back then I said --


It was incredibly different in tone from any of the others I had read so far. At first, I wasn't sure if I liked it but over time the ideas have grown on me and I hope to read it again soon.

Well, it's been three years since I first read about the powerful and wily Aunt Maria (pronounced Ma-rye-ah) and the ideas have grown on me even more and I really enjoyed it this time through! 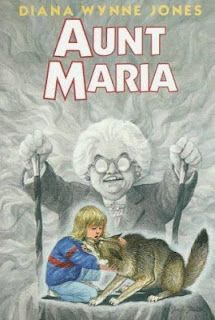 Mig (Naomi Margaret) and her brother Chris (Christian) Laker have gone with their mom to visit Aunt Maria in Cranbury-on-Sea. Maria is not actually related to them but rather is related to their father by marriage. But their father's car went over a cliff on his way to Cranbury and so now they feel obliged to pay a visit even though they always have a miserable time there. But will Aunt Maria's wheedling and "managing" drive them all crazy? And was that Mig and Chris' old car that they just saw in town -- the one that supposedly went off a cliff with their dad inside? And why are there twelve creepy old ladies that all flock around Aunt Maria and seem to know what is happening in the house without being told? This is a story of magic and the complicated relationships between men and women, adults and children.

What I liked most about this story was Mig -- a strong but cautious girl who is entirely believable. The family dynamics between the two siblings and their mother was familiar and really well written. I also liked the dysfunctional relationship between their parents. Mom and dad were in the process of getting a divorce when he died and so we don't see a grieving mother. We see a woman who doesn't know quite how to feel and who still holds some anger that her husband left her for another. I guess that's something that I like about Diana Wynne Jones in general. She wasn't afraid to put realistic relationships into her books and I think it's evidence that she held the intelligence of young readers in high regard.

I do wish that the magic of Cranbury had been explained and expanded a bit more. I'm still not entirely sure how it works and wouldn't have minded this book being about 20 pages longer. But I still really enjoyed this story on second read and will pick it up again sometime -- even though Maria's machinations give me goose flesh! In the UK, the book is called Black Maria, a card game that most of us probably know as Hearts, where you try and avoid getting stuck with the costly queen of spades. And I included this cover art because, well, doesn't Mig look an awful lot like our own blogging friend Amanda? Well?