Right before Witch Week, I squeezed in a reread of The Game. It's one of Diana's shorter novels and is a standalone. It follows Hayley, an orphan who has grown up with her kind but busy grandfather and her bossy and strict grandmother. She has a feeling that their family might be a bit different but doesn't learn exactly how different until she gets in trouble and is sent away. This is when she meets her aunts and her cousins and they invite her to play "The Game".

I didn't love this book when I read it in 2009 because it felt a bit too bare bones. Because it covers such a wide territory of gods, goddesses, myths and astrology, I just felt like there wasn't enough explanation to make it feel like a successful story -- especially for a kid/teen who would have even less background knowledge of these subjects than I do. I stand by that evaluation but I will also say that my reread was a success in that I do appreciate it more now and have a better opinion of it overall. It's a clever story and a fun read. It just also makes me want to take some sort of mythology course.

I still don't really like the freaky US cover shown above so I may go looking for the UK one below. It's more symbolic of the story and less like a police composite of what Hayley might look like. 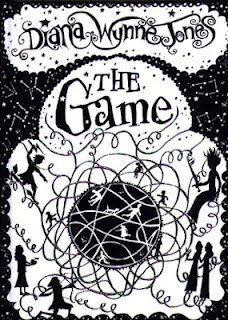 Getting schooled in mythology,
K
Posted by Kristen M. at 12:09 AM