Thomas the Rhymer: A Survey

As in my Tam Lin post last week, I was able to read a couple of sources to become more familiar with the story of Thomas the Rhymer. Here is a link to the Child version of this ballad.

Unlike Tam Lin who was taken against his will for many years and then rescued from the Fairy Queen right before he was to be sacrificed to Hell, Thomas the Rhymer, an adventurous minstrel/harper by trade, goes willingly with the queen after meeting her on the Eildon Hills and getting a kiss from her. She takes him to Elfland for seven years during which time he is unable to speak, bound only to be an observer and the Queen's lover. At the end of seven years, he is released and he is given the gift of true speech.


Syne they came on to a garden green,
And she pu'd an apple frae the tree:
"Take this for thy wages, True Thomas,
It will give the tongue that can never lie."

It appears the ballad is not always continued past the point where he returns to the world of man but, when it is, it turns out that his "true speech" is the power of prophecy. He uses this power across the land and lives a comfortable life until the Fairy Queen sends two messengers--two white deer--to fetch him back to her for good and even this time he goes willingly.

I read a brief version in Barbara Ker Wilson's Stories from Scotland and then the illustrated version in The Book of Ballads (text by Sharyn McCrumb, illustrations by Charles Vess). I don't think my library system had any picture book version of the story but it makes sense because this is basically the story of a human who sees the beautiful fairy queen and decides that it's worth seven years of his life to be her lover. 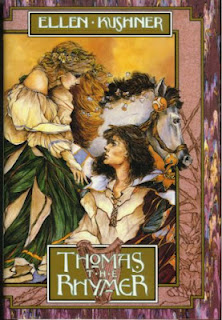 After I read both of those, I read Ellen Kushner's novel Thomas the Rhymer. To be honest, this book is more of what I thought Tam Lin would be -- taking the original ballad and making a full story out of it. I really loved reading this one!  It is told from four different points of view, one being Thomas' during his time in Elfland. It has a romance added in but I didn't think that took away from the original ballad at all. This was such a bittersweet story and the reader is obviously meant to fall for Thomas. And that's where this story differs so much from Tam Lin -- because Tam Lin is obviously about the strong and independent Janet, despite the title, but Thomas is about a man who can take care of himself.

I can't wait to discuss these two ballads in the context of Fire and Hemlock on Friday!