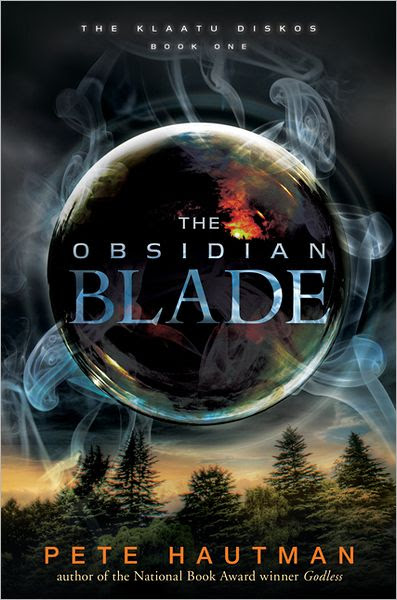 I'm trying to branch out a bit in my science fiction reading so I accepted a review copy of The Obsidian Blade, the first book in a new YA trilogy, The Klaatu Diskos, by Pete Hautman. This was a story with lots of action, compelling characters and a truly world-threatening situation. It was a quick read though it deals with some weighty issues.

Tucker is a teenager who becomes very confused when his father disappears off of the roof of their house and he sees a shimmering in the air at the very spot where it happened. But his dad returns an hour later, walking up the street with a strange foreign girl in tow, acting like nothing happened. When Tucker's mom then starts exhibiting strange emotional symptoms, he wonders if there is something to those unearthly shimmering disks in the sky. There's only one way to find out ...

This book has a bit of everything -- time travel, future dystopia, mysterious beings and hyper-advanced technology. It incorporates a lot of different elements but I was definitely able to keep up with it all. Tucker was a great character, as was his uncle Kosh. Their actions were fully supported by their experiences. I wasn't quite as happy with Tucker's parents. His father's emotional distance and motivation were both suspect. And some readers might be put off by Hautman's use of religious and biblical events in the father's story. The plot line of Tucker's mother's mental illness and diagnosis bothered me too. I still would like to know what has happened to all of them, though, so I will look for the next book in the series when it comes out.

Sticking to one timeline,
K
Posted by Kristen M. at 12:18 AM