Aloha oukou! (Hello to all of you!)

So, yes, 10 days on Oahu was apparently just what the doctor ordered. I read almost all of my books (started the fifth--Year of the Griffin--on the plane home), got a little bit of sun, ate some Spam and took a bunch of pictures with the new camera I got for my birthday in April.

Here are some (okay, lots of) highlights -- 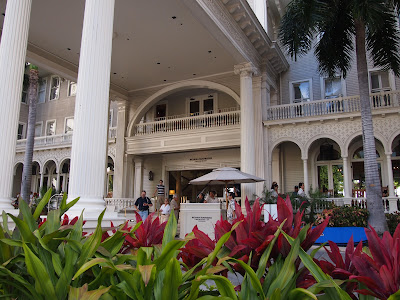 We stayed at the gorgeous Moana Surfrider hotel on Waikiki Beach. It was the first hotel built on the beach, with the main building dating to 1901. We walked through the front entrance as much as possible because it made us feel like we are much posher than we really are! 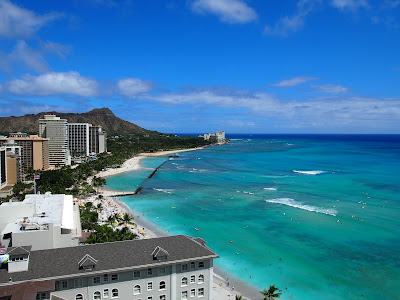 If you ever get a chance to stay there, ask for a high-floor, Diamondhead-facing Tower room. This was the view. I'll be dreaming about it for years to come.

Due to jetlag, I caught the sunrise on the first morning I was there. No such luck any other morning. :)

There were so many gorgeous flowers there. These were at the Honolulu Zoo which doubles as a botanical garden. 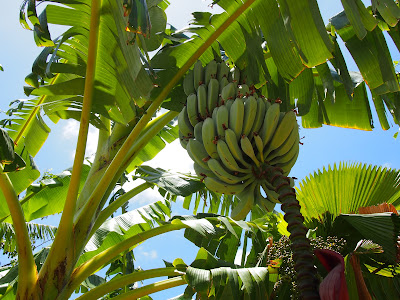 Z was most excited about the banana trees though. It's the one thing he told me he wanted to see while he was there. As you can guess, we don't have any of these in Washington. 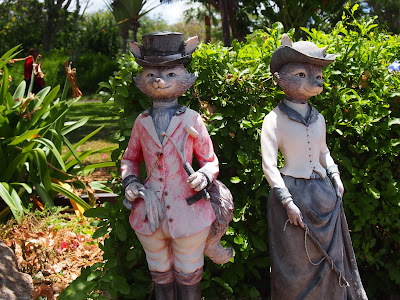 There was a small garden there too with herbs and all sorts of things but also these ceramic/porcelain? figures all over. These two just creeped me out to no end and I thought some of you would appreciate them in some way as well. I mean, foxes dressed for a fox hunt -- that's weird, right? 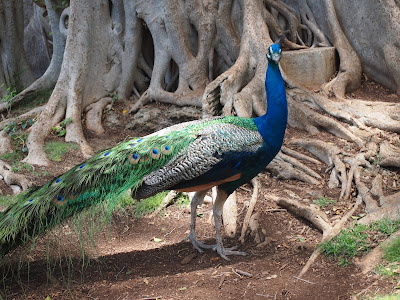 I could do a whole post of the animals we saw there but, as they aren't really natives and you can find them at most zoos, I'm not including them here except for this guy who let me walk right up to him and snap a few piccies. He seemed as interested about us as we were about him. 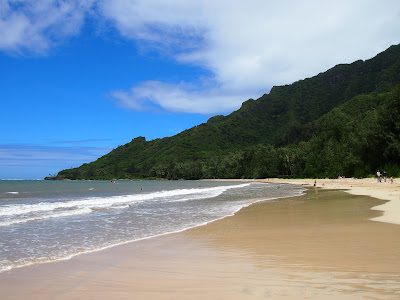 Z got a surfing lesson from a friend of a friend at this gorgeous beach -- Kahana Beach Park at Kahana Bay in Ka'a'awa (pronounced caw-ah-ah-va). Our friends actually have property on the bay and can walk right out here any time they want. The water stays shallow for quite a long way out. If you ever take a trip with little kids, this quiet beach on the Windward coast is a great starter beach with soft sand and small waves. 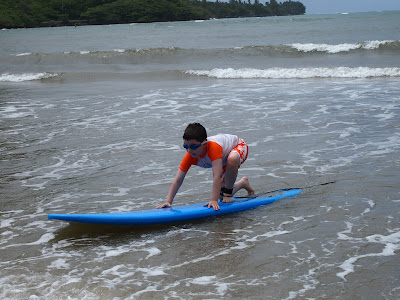 And here's Z doing his thing. I was so proud of him for trying surfing! 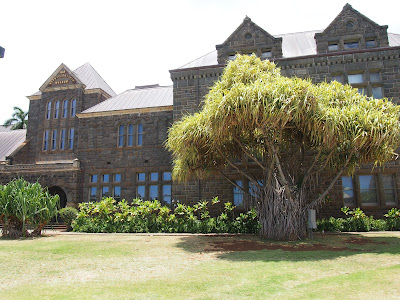 We had another great day trip to the Bishop Museum in Honolulu. It was founded in 1889 by Charles Reed Bishop after his wife, Princess Bernice Pauahi Bishop, last descendant of the Kamehameha family, died. It's a cultural, historical and scientific museum of Polynesia and Hawaii.

There was so much to see at the museum. I didn't take half as many pictures as I wanted to. We even got to see rocks remelted into searing hot lava! 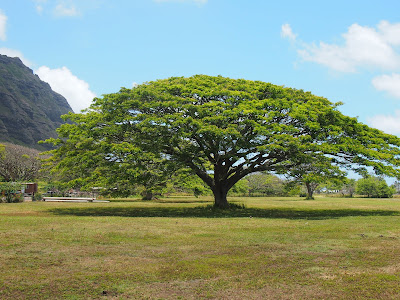 Our next excursion was to Kualoa Ranch, a very large location where they film a lot of tv and movies like LOST, Hawaii 5-0 and 50 First Dates. That's the reason we went and took the tours but, at least for me, it turned out to be the scenery and the Hawaiian history that stole the show. 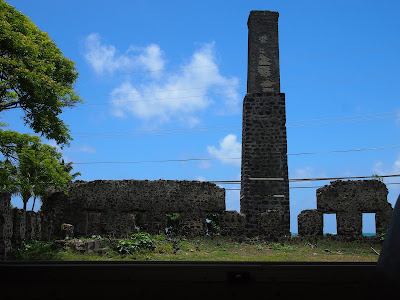 These are the remains of an old sugar mill on the property. They were only able to successfully grow sugar for a couple of years and then they switched to cattle farming. (I think that Al will appreciate this piccie!) 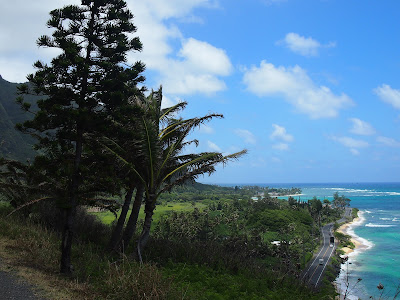 There were these tropical evergreens on the property that looked really strange to us. But we spent a lot of time looking right past them to the gorgeous ocean view. If you follow this road down a few more miles, you get to where I lived when I was little, in a house on the left side, just across the road from the shore. 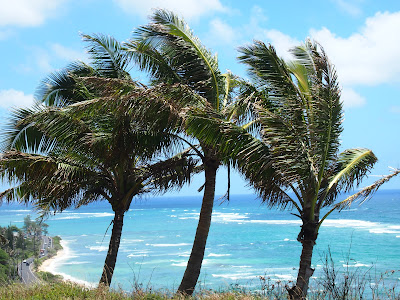 I took a LOT of pictures of trees on this trip. I love the palms and the banyans. 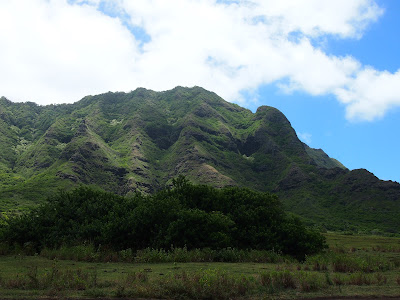 Of course, the mountains here are just as dramatic and gorgeous. I have lots of pics of them too. 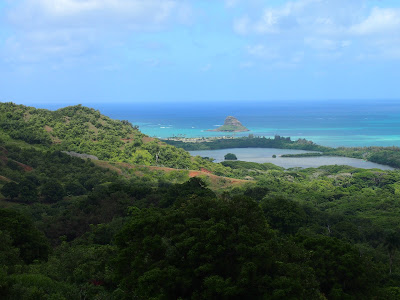 These were some ancient Hawaiian fish ponds. The shore used to be the inner edge of these ponds but they built a rock wall on the outside and blocked off this portion of the ocean. It's an area about the size of a shopping mall -- quite large. They stopped fishing in it a few years ago and now they just film things like the LOST submarine scenes there. 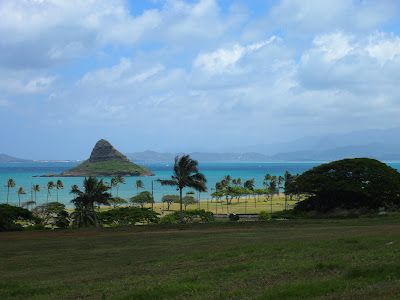 And this is a well-known island called Mokoli'i, or more commonly Chinaman's Hat. Passing this island always meant I was almost home so it's one of my favorite sights in the area.

Well, I think I will stop there. I tried to convince the husband that we should consider moving but he didn't seem to take the bait. So I'll just have to look forward to our next trip back!