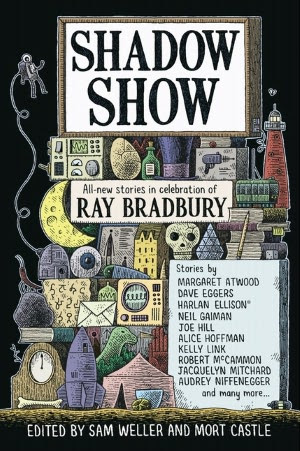 This seems like the wrong time to admit that I've never read anything by Ray Bradbury. I knew of him, he visited my suburban library regularly when I was a kid, and I knew of many of his stories. But somehow I never picked up any of his works and, as I read the stories of some of the many authors who count him as an influence, I strongly regret it and hope to rectify it soon.

Shadow Show: All-new stories in celebration of Ray Bradbury, edited by Sam Weller and Mort Castle, is a unique collection in that each short story is followed by an "about this story" in which the author writes a bit (sometimes a lot) about their inspiration. The main thing you bring away from each and every one of them is that Ray Bradbury was loved -- by readers, by writers, by children and adults. And, after reading Bradbury's own introduction to the collection where he accepts the mantle of literary father to so many, it's easy to see why. His recent death adds a bittersweet note to the volume but nothing was changed to the past tense, keeping the tone strictly as an homage to a living legend and not a eulogy.

Gaiman's story, The Man Who Forgot Ray Bradbury, set the bar very high for this collection but I'm happy to say that there were very few disappointments after that. Of the twenty-six stories, I marked nine with 5 stars (those by Neil Gaiman, Joe Hill, John McNally, Robert McCammon, Alice Hoffman, Gary Braunbeck, Bonnie Joe Campbell, Audrey Niffenegger and Dave Eggers - how's that for a list of wonderful authors?). The rest were mostly fours (10 of them) with only four threes, one 2, one 1 and one DNF. And my list of Bradbury's works to explore is longer than the list of stories in this book!

I think that, of all the stories, Joe Hill's fantastic tale, By the Silver Water of Lake Champlain, is the one that has haunted me the most. If you get your hands on this book, turn to that tale first -- unless you want to cry, and then read Neil Gaiman's story first.