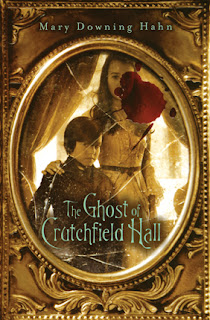 A very middle grade ghost story, The Ghost of Crutchfield Hall (2010) was my first Mary Downing Hahn book and I hope her others are better as I hear good things about them. This is a short tale about an orphaned twelve-year old girl, Florence, who has finally been sent for by her Great-Uncle Thomas, who keeps a country home with his sister, Great-Aunt Eugenia, and his nephew James. But there is one other resident of the house, one with evil intentions, and that is James' dead sister Sophia.

Though this book was definitely creepy, I couldn't stand Florence's lack of willpower or her Aunt Eugenia's ridiculous prejudice against her. The characters were just too one-dimensional and I was disappointed that the female main character was so weak. I was actually kind of rooting for something bad to happen to her by the end, which I'm sure wasn't the author's intention.

If anyone could recommend a better MDH book to me, I would appreciate it! I'm willing to give her another chance.

More indignant than frightened,
K
Posted by Kristen M. at 12:57 AM