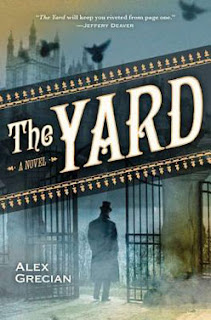 I am WAY behind on reviewing my RIP reads -- which I'm sure you have assumed I've been delving into since September 1st. In fact, I finished The Yard by Alex Grecian soon after and, if anything qualifies as a perilous read, it's this dark Victorian tale.

As part of the newly created "Murder Squad" of Scotland Yard, shortly after the Ripper killings have finally stopped, Walter Day is not sure he even belongs in London with the other elite investigators. But when he lands an incredibly difficult case--the murder of another detective on the squad--he knows it's both a chance to prove himself to the department and to decide once and for all if this is the life that he wants. With a focus on early forensics, mental health and police procedures, this novel is not only a gripping cat-and-mouse chase but also a fascinating historical journey.

To be honest, some of the subject matter in this story was right on the border of my comfort zone (child abuse, violence, etc.) and I kept considering putting the book down and walking away from it. But the story was intriguing so I stuck with it and was rewarded with well-developed characters and a satisfying ending. I even ended up with a couple of crushes on some flawed but decent men. Overall, this is a very strong first novel that, I would guess, will likely begin a series. And, with the strength of the characters and the interesting historical setting, I'm sure it will be one I'll keep up with.

Still looking over my shoulder,
K
Posted by Kristen M. at 12:06 AM