Cheerful is in the Eye of the Beholder 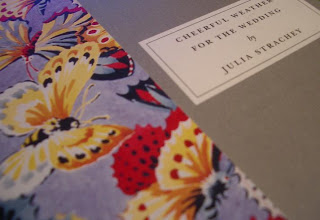 I had just added Cheerful Weather for the Wedding to my movie queue when Simon suggested that there be a read-along of the 1932 novella by Julia Strachey. I couldn't say no to that and so, while getting my hair cut and colored last week on a typically dreary January afternoon, I was surprisingly transported away to a sunny March day with blustery winds, where I waited (somewhat) patiently with a unique cast of characters for Dolly Thatcham's wedding to begin.

(Note: as the characters are pretty much the main attraction of this story, this post will be a bit spoilery.)

As we wait in the long hall, I find myself sympathizing with thirteen year-old Robert as his older brother Tom harasses him for ::gulp:: having on the wrong socks. Tom has always been so bossy and stuffy, hasn't he? I cringe to see Kitty, younger sister to the bride, acting all of her awkward self in a dress that doesn't look half as good on her as it does on dear Evelyn. I mean, yellow is a gorgeous color for the spring but it doesn't suit everyone, does it? And not to speak ill of the hostess but I swear that Mrs. Thatcham gets more dotty with every passing year. Even I heard her tell poor Millman to set up the luncheon in the library. Oh, and then there's that tragic young anthropologist Joseph sitting in the other room. I know that he and Dolly spent a lot of time together last summer but I can't recall ever thinking they were "together" exactly. Well, it seems like he might have been sweet on her after all. Was that a tortoise that just passed by the window? How bizarre! And who are all of these people flowing in to luncheon now? Cousin Lob, Canon Dakin, Aunt Bella -- what a diverse and amusing family. It makes up for this dreadfully blustery day. I hope the wedding itself is half as entertaining as the morning has been.

And back to the present ...
Because this novella does focus so strongly on characters, with only a bit of action right toward the end, I'm a bit worried about the movie version. Looking at the cast list, they've added characters and obviously taken some of the implied situations from Dolly's past and built them up into the bulk of the movie. However, most of the appeal of the novella was in not knowing everything and in having the drama being a bit of a non-starter. How close were Joseph and Dolly really? Is what he revealed to her mother at the end of the story true? Or was this simply a case of him feeling upset that he didn't open up when he had the chance? What if they had a few more moments alone before the Canon came along? I think I'll likely postpone watching the film for a bit to put some distance between it and this well-crafted story.

Feeling not the slightest bit cheerful despite the weather,
K
Posted by Kristen M. at 12:05 AM