New Release: Speaking from Among the Bones 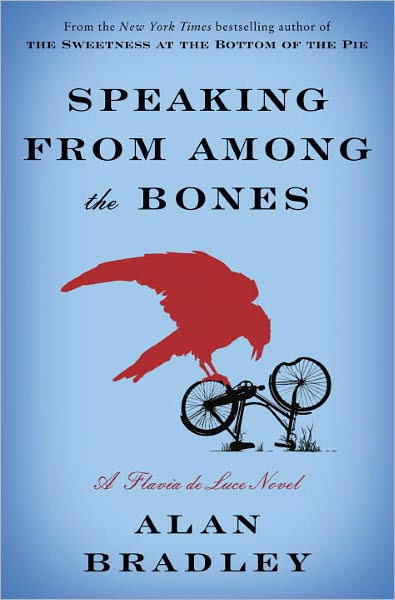 You might have noticed that every time a new Flavia de Luce novel comes out, I declare that it's the best yet. Well, I apologize but I'm going to have to say the same again about Speaking from Among the Bones. On this fifth time out, Alan Bradley writes Flavia with more depth and more emotional growth than ever before. She still has a somewhat outlandish adventure but it is both intelligent and fun and there's a twist at the end that could mean a dramatic change for the de Luce family.

I won't talk about the plot since this is a series book but, if you've managed to somehow miss the series so far, I'll give you the basics. Flavia is a pre-teen in early 1950s England. She lives with her somewhat horrid older sisters, her distracted father and his enigmatic manservant in Buckshaw, a sprawling manor left to them all by Flavia's mother after she disappeared on an adventure in the Himalayas years before. Flavia is obsessed with chemistry and has inherited a top-of-the-line laboratory from an uncle with a similar taste for science. Specifically, she has an obsession with poisons. And, as with any over-curious child, she also manages to get into all sorts of scrapes and, of course, stumbles over more than one dead body as she grows up. This is a mystery series that is equal parts cozy and dark and is always compelling and smart.

This novel has been released today so either run out and get a copy or start the series and catch up. Chances are, you won't regret it.

Already thirsting for book six,
K
Posted by Kristen M. at 12:04 AM