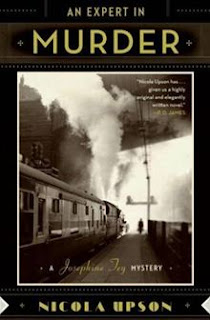 I've been meaning to start this series, the Josephine Tey Mysteries, for a while and, now that the fourth book in the series is coming out next April, I finally picked up An Expert in Murder for the RIP season. I was hoping for a good read since I'm a fan of Tey's own books. Thankfully, Nicola Upson has written a very compelling historical mystery that doesn't ask the reader to believe that a playwright is secretly a top-notch sleuth. There is an actual detective in this story -- Detective Inspector Archie Penrose of Scotland Yard. Archie is, in fact, the inspiration for Josephine's fictional detective Alan Grant and is a very competent police officer. Tey's role in the story is simply as a bystander who is unknowingly a cog in the murderous plans of someone who seems to be obsessed with her hit play, Richard of Bordeaux.

Many readers will see some similarities between the Josephine Tey character and Jacqueline Winspear's Maisie Dobbs but, while both are strong, single women who have been damaged by a wartime loss, they are also different in many ways. I think the true test of this series will be in the next book, Angel With Two Faces. While Maisie is a private investigator, which lends itself well to a mystery series, Tey is simply an author, although one of detective stories. So, as long as the situations she finds herself in don't become forced or far-fetched, I'll be interested in following Tey and seeing how the character matures.