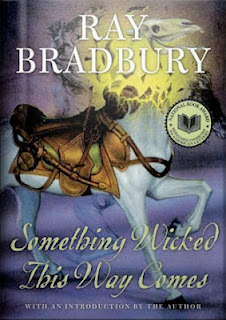 Well, I kept my promise that I would finally read some Ray Bradbury after enjoying Shadow Show in July. And I didn't just read any old Bradbury work but I chose the story that spawned the movie that terrified me the most in my admittedly sheltered childhood -- Something Wicked This Way Comes. I had a lingering fear of carousels for years after seeing that film. But, for some reason, while looking through my many RIP reads, I had a strong desire to get this one from the library. Before I chickened out, I put in my request and set out on this literary adventure.

Jim Nightshade and Will Halloway are boys on the cusp of becoming men, with Jim more enthusiastic about it than Will. When a strange storm blows into Green Town just before Halloween, bringing Cooger & Dark's Pandemonium Shadow Show with it, the boys soon find that living a quiet, normal life isn't as overrated as it seemed just the day before. But once events are set in motion, it's a race against time and the forces of evil for Jim and Will.

With somewhat strange language and cadence, this is a difficult book to get into at first. But once you get used to it, the story sweeps you away into the clutches of the supernatural carnival and its devilish inhabitants. At first I found the story to be atmospheric but not scary but that soon changed and I was quite tense by the end of the tale. I can't explain exactly why this story works but it does. It never won any awards but its influence on other modern authors is undeniable.

And, since I overcame some of my SWTWC fears, I decided it was finally time to rewatch the 1983 film. In fact, Z sat down to watch it with me. And? It was pretty bad. Though the casting of Jonathan Pryce as Mr. Dark was inspired and Jason Robards as Will's dad was pretty good, the boys were terrible actors. There's one scene where they sneak onto the closed carousel and hop on some horses and do this weird maniacal fake laughing. It was awful. There were unnecessary changes in the story and much of the mystery was taken out. It was too obvious in most parts and had bizarre orchestration and cheap special effects. I'm surprised that I paid attention enough to the movie when I was a kid to be scared by it. Z was bored pretty much from the start. He ended up reading books instead of watching and kept asking when it was going to be over.

Verdict: Read the book and skip the movie. Bradbury should never have been Disney-fied.