How DWJ Saved the Day 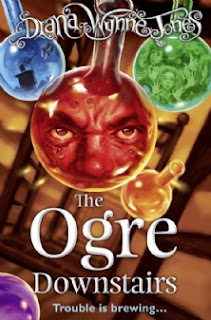 I meant this book--The Ogre Downstairs--to be an RIP read but it just didn't fit in the category well enough. What it did end up being though was a sanity saver. I got the call around noon on September 13th that my younger sister's husband had been killed in a motorcycle accident, my sister that was seven months pregnant with her 4th child (and is now due in four weeks). I had to take an immediate flight down to California and I needed the right read to take with me -- something to keep me from bursting into tears on the plane, something to distract me from worrying about my own family that I was leaving behind. I ended up reading two thirds of this book on the way down and finished it on the way back. Diana Wynne Jones was, as expected, the perfect companion during a rough time.

The ogre in this book is one of the most terrifying creatures in the world -- a stepdad. And apparently step-brothers aren't the best either, at least that's what Caspar, Johnny and Gwinny think. Mr. McIntyre likes to bark orders up the stairs and is constantly yelling at the kids to be quiet, hence the nickname "The Ogre". But one day, he brings home chemistry sets for his son Malcolm and for Johnny that turn out to be anything but standard. Is the magic that's unleashed the kind that will destroy everything or could it possibly be the kind that could bring this blended family together?

I loved this book and I don't think it was just the timing. This isn't your typical DWJ fantasy and the magic is secondary to the family dynamics. But the book just felt so honest and real that I couldn't help becoming completely invested in the lives of these kids. I felt their elation at discovering magic, their exasperation at being constantly scolded, their slow changes of opinion as their step-family's true natures were revealed. But most of all, this story got me through a terrible weekend and I'll always be thankful for that.