The Christmas Mystery by Jostein Gaarder 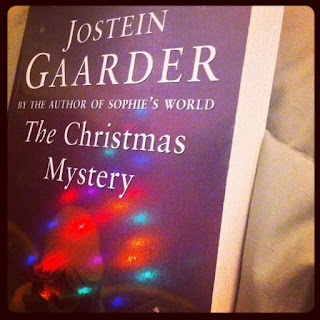 In the days before Christmas and through that day of celebration, I read a book that I had received from my Secret Santa last year, Robyn -- The Christmas Mystery by Jostein Gaarder. She sent it from South Africa but it's a book translated from Norwegian -- a story that travels through space and time from modern times to Norway in 1948 to Bethlehem in the year zero, the year of the birth of Jesus of Nazareth. While relating the story of a "magic" advent calendar, found in a dusty bookshop in modern times, the book is also an advent calendar of its own with twenty-four short chapters. It tells of angels and shepherds and a journey of destiny and celebration.

Though I was raised in a Christian religion, I no longer subscribe to any particular faith. Still, I found this book to be thought-provoking and reverent and a perfect companion to the holiday. It travels to the heart of the season with a message of love and tolerance. I am very happy to have received this gift and to have saved it to read at this time. Robyn also mentioned that she reads it some years beginning on December 1st, one chapter a day, which I think sounds like a great idea. I will definitely pick it up again when the mood strikes.

Closing each small door until next year,
K
Posted by Kristen M. at 12:18 AM