"The sky above the port was the color of television, tuned to a dead channel." 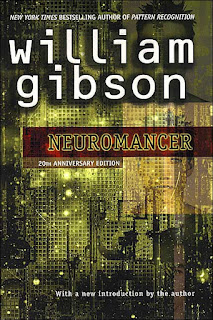 William Gibson's Neuromancer is a book that has been on our home shelves for a long time. I know that my husband owned it for a few years even before he got his copy signed by Gibson in 2003. I finally picked it up last month for both the 2013 Science Fiction Experience and the 1001 Books to Read Before You Die list. It was written in 1984 and is a bonafide science-fiction classic. I don't know why I never read it before now but I definitely feel like a more well-rounded reader after having experienced this quintessential cyberpunk adventure.

Case was an "interface cowboy", a hacker who could access and navigate a second world that had built up inside the computer matrix. But after dipping his fingers into the pocket of his employer, he was poisoned in a way that removed his ability to access the matrix. He then drifted aimlessly in Japan, becoming addicted to drugs and acting as a middle man in some shady deals, until he was approached by the mysterious Armitage and his cybernetically-enhanced muscle, Molly. Armitage offered Case something he had been unable to find on his own--a cure for the nervous system damage done by the poison--if he would just use that ability to perform one big hack job. Case can't resist and the adventure begins.

I had mixed feelings while reading this novel. It took me a while to get into the story and I never really connected emotionally with any of the characters -- though admittedly Case and Molly started growing on me by the end. I was also uncomfortable with the excessive drug use throughout the book and there were a couple of scenes that came close to my threshold for violence. But, at the same time, I could see how influential the novel was on both literature and pop culture and, by the end of the story, I was drawn into the plot and wanted to know how everything resolved. There were parts that reminded me of Haruki Murakami's Hard-Boiled Wonderland and the End of the World but I have to admit that I prefer Murakami's blend of science fiction and fantasy to this pure sci-fi. I think I will take my husband's advice on which (if any) other Gibson novels I will read. I'm definitely curious about the Johnny Mnemonic short story now. And I suppose I need to try Neal Stephenson too. All of his books are on our shelves as well.

Slowly becoming a sci-fi reader,
K
Posted by Kristen M. at 12:56 AM