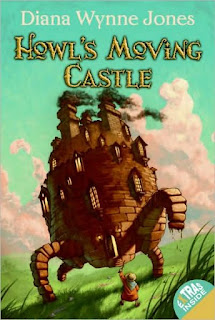 Welcome to the Howl's Moving Castle read-along discussion! If you have written your thoughts up on your own site, please share the link in a comment so everyone can come visit.

I thought I would just start the discussion with a few questions. Answer some or all of them -- whatever you feel like doing. I want this to be an easy-going and fun discussion! And, of course, if you have any of your own questions, please add them to the comment string.

1. Was this your first time reading the story or was it a re-read? If it was a re-read, was it better this time (Jenny's Law)?

2. What did you think of all of the characters who weren't "themselves" -- Sophie, Howl, Calcifer, the Witch of the Waste, Lettie, Martha, Prince Justin, Wizard Suliman? In fact, which characters, if any, did you think were truly honest? Michael? Fanny? Mrs. Pentstemmon?


"But do you honestly think I don't know my own business well enough not to spot a strong spell like that when I see it? I had several goes at taking it off you when you weren't looking. But nothing seems to work. I took you to Mrs. Pentstemmon, hoping she could do something, but she evidently couldn't. I came to the conclusion that you liked being in disguise."
"Disguise!" Sophie yelled.
Howl laughed at her. "It must be, since you're doing it yourself," he said.

I think there are definitely two sets of disguised characters in the story -- those who want to be something other than what they are and those who only want to be their true selves again.

3. Why does Sophie never really experiment with her powers even after she accepts that she is a witch?

My answer: I have no idea! That was one of the things that really perplexed me this time through. She never tries to do anything specific with her magic except to yell at ferns to become daffodils and even that is pretty random. She never tries to use magic to clean or sew. She will use Calcifer's magic and Michael's spells and Howl's seven-league boots but her own "magic wand" is only used once and that's in a very vague way when she waves it at the WotW's servants. Any other magic that she does is accidental or inadvertent.

4. If the moving castle is the physical embodiment of Howl's "slither-outer"ness, now that he's actually managed to find real love and accomplish a few things, is it time to give up the castle?

My answer: Maybe, but that would be no fun, right?

I'll start with those. Feel free to discuss anything -- Howl's earring, the interchangeability of spells and poetry, the amazing flower garden, the idea of first children having no destiny, what part of yourself you would give a fire demon.

Looking for Howl behind every door,
K
Posted by Kristen M. at 12:01 AM