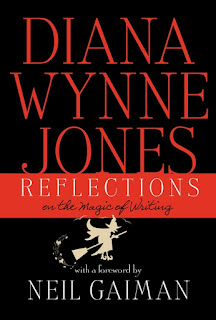 For this first Reflections post, I would like to start with Neil Gaiman's Foreword and Charlie Butler's Reflections on Reflections. Both of these pieces are wonderful from start to finish but I'll just pull out a couple of passages that really stood out as I read them.


"She does not describe herself in this book, so I shall describe her for you: she had a shock of curly, dark hair and, much of the time, a smile, which ranged from easygoing and content to a broad whorl of delight, the smile of someone who was enjoying herself enormously. She laughed a lot, too, the easy laugh of someone who thought the world was funny and filled with interesting things, and she would laugh at her own anecdotes, in the way of someone who had simply not stopped finding what she was going to tell you funny." -- Neil Gaiman

On Diana's range of writing:


"Diana wrote books for young children, for older children, and for adults. She wrote picture books, chapter books, full-length novels, poetry, plays, and non-fiction. She wrote fantasy, science fiction, romance, farce, and satire; and she wrote books that looped the loop, refusing to be confined within any generic box. She could handle outrageous comedy, but also turn on a sixpence and evoke subtle shades of desire, grief, loneliness, bliss, and love, and do so in prose that never strove to draw attention to its own virtuosity." -- Charlie Butler

On reading Diana as an adult:


"I am a handful of years too old to have read Diana's books as a boy. I wish I had--she would have been one of those people who formed the way I saw the world, the way I thought about it and perceived it. Instead, reading her, it felt familiar, and when, in my twenties, I read all of Diana's books that I could find, it felt like I was coming home." --Neil Gaiman

"By the time I first read Diana Wynne Jones I was already an adult--but that doesn't matter. Many of her readers encounter her later in life, and those who know her as children tend to stick with her into adulthood. That is one of her qualities: her books change and grow as you do." -- Charlie Butler

Because I didn't discover Diana's books until I was an adult, I felt that I had missed out, that I would miss out on something essential in the DWJ reading experience. But, to the contrary, I find that her books aren't for a single age group or readership, no matter whom they are marketed to. And I believe that this is because her love of life and people, her love of each story and its characters, comes through and speaks to any reader who picks up one of her books. Sometimes it's more of a whisper and other times you are almost knocked over by the intensity but it's always there.

(By the way, you're going to probably see mention of Jenny's Law this month. It is simply this: "Diana Wynne Jones is better on a reread", a theory put forth by the aforementioned Jenny that has proved to be true on every occasion.)