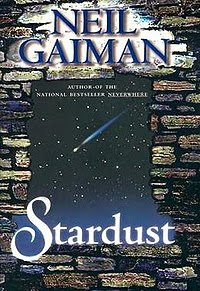 As part of the Once Upon a Time VII Challenge, Carl is hosting a Stardust Read-Along. It's a fairly short book so we're writing about the first half today and the second half next week. If you're not familiar with this book, it's about a boy, Tristran Thorn, from a town called Wall, located on the border of Faerie. To please a girl (who perhaps doesn't deserve his attentions), he sets off into Faerie one day to search for a fallen star. The story is full of colorful characters--both good and evil--and strange lands.

Now, since this is a read-along discussion, there be spoilers ahead. So, if you haven't read the book yet, leave now and take this time to add Stardust to your TBR or place a library hold. 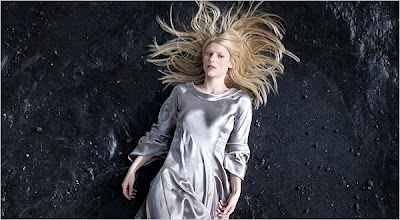 1. We have spent a little time with Tristran and even less time with the star. What are your initial thoughts/impressions of our two protagonists?

I feel like Tristran had a lot to learn about the human world so it was strange that he went to a place that he knew even less about. So far, he's very trusting and that will likely get him into trouble -- even more than he's already experienced. But, he also seems to have a gift that will hopefully help him and balance it out. The star, on the other hand, seems very worldly and wily for someone who has just arrived hours before.

2. There are some very interesting potential villains introduced in this first half of the book. Do any of them particularly stand out to you? If so why or why not?

The villains in this book are chilling and creepy. I think they all stand out, maybe more than the protagonists at this point. The brothers Septimus and Primus have said little but their singlemindedness is obvious. The sisters Lilim are much more chatty and catty and are disturbing, verging on terrifying. Together they are very strong and I have vague memories of what is to come in the second half and I'm not particularly looking forward to reading some of it! 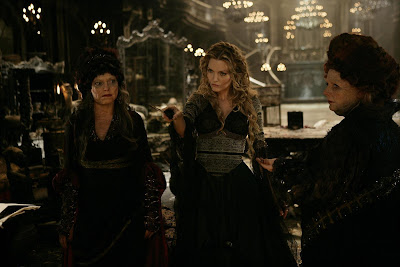 3. In Chapter Three, just after the section with the brothers in Stormhold, Neil Gaiman gives us a description of Faerie that includes "each land that has been forced off the map by explorers and the brave going out and proving it wasn't there...". What imaginary lands do you then hope are a part of Faerie?

This line stood out to me too. It's beautiful and I didn't think of it so much as related to imaginary lands but more of "lost lands" like the American prairies full of buffalo and wolves and wild horses or the oceans full of gentle whales and non-bleached coral, and even pollution and dam-free rivers throughout. There are, of course, unicorns and, hopefully, dodos and tasmanian tigers and all of the other species that have been "forced off the map".

4. We do not get to spend a great deal of time in the market but while there we are given a number of interesting descriptions of the wares being bartered or sold. Which if any of them caught your eye, either as items you would like to possess or ones you would most certainly hope to avoid.

Everlasting lavender sounds wonderful. The line about coats ("Coats of night! Coats of twilight! Coats of dusk!") sounded like a description of the contents of Neil Gaiman's hall closet. ;) And, after vacuuming gobs of cat hair today, the crystal cat sounds nice right about now.

5. If you have read much of Gaiman's work, particularly his short fiction, then you have come across some rather graphic and disturbing portrayals of sex. Gaiman offers up something very different in the way of a sex scene early on in Stardust. What are your feelings of the scene either in general or as a contrast to other Gaiman-penned scenes involving sex?

It was strange because I've read this book before but I remembered it as much more tame than it really is. I had completely forgotten this sex scene -- which is probably a good thing because the ones that tend to stick with me are Gaiman's more horrific or graphic ones (like the beginning of American Gods). I still get really uncomfortable every time I read one of his sex scenes. His mild-mannered exterior hides a very graphic imagination, doesn't it?

6. I suspect Neil Gaiman is influenced by a number of fairy and folk tales in Stardust. Are there any elements of the story that made a particular impression and/or reminded you of other fairy stories you have read or are familiar with?

I am terrible with specific fairy tales but so many of the general ideas are there -- maidens and unicorns, long-distance travel by candle (similar to seven-league boots), witches, forests with evil intent. It's all somewhat familiar but also presented in a way that feels fresh and different.

7. And finally, which of the many side characters introduced have caught your eye and why? Or what else about the story thus far is of interest to you?

I really like the "little hairy man", Tristran's first companion in Faerie. He seems honest and kind and a bit lonely. He repays a decades old debt in an uneven manner -- meaning the things he does for Tristran seem to be of much more value and breadth than just a place to sleep, which is what he was given by Tristran's father. I hope to see him again in the second half though I don't know how Tristran will get back to him.

I'm really excited to read the second half of this book. It's a much different experience than I remember from the first time, possibly because I've read even more Gaiman now and I just feel like this strange land is still somehow familiar.

Prepping for more adventure,
K
Posted by Kristen M. at 12:04 AM