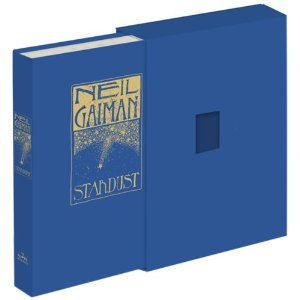 Time for the second half discussion of Stardust by Neil Gaiman. As was the case last week, there will be spoilers in the answers.

1. In the first part we saw a naive, wool-headed and self-involved Tristran. What are your thoughts about Tristran and his personal journey now that the book has ended?

I really liked Tristran all through his journey. Even when he was young and naive, he was earnest and hopeful. And then he was cautious but still honest and he truly seemed to enjoy all of the new feelings and new experiences he had. It was a bit callous that he left his father and family forever in the end but he was changed enough by Faerie that I don't think he could have gone back to life in Wall.

2. The star, who we now know as Yvaine, also experienced a transformation of her own. So I ask the same question, what are your thoughts about Yvaine and the journey she took?

I also liked Yvaine through the whole story. Her initial reactions were understandable and I don't think she ever did anything unreasonable. I did feel sad for her in the end, that she lived so long, alone. It was unavoidable but I really hoped for a fairy tale ending to this fairy story. Still, she got a chance to live and love and not be hacked to pieces so that's always nice.

3. The villains of the story came to interesting ends, but not necessarily expected ones. How do you feel about Neil Gaiman's handling of the Stormhold brothers (who had remained at the end of Part 1) and the two witches, the one Lilim and Ditchwater Sal?

It's strange but I felt sad for the brothers even though they were, well, murderous. They never saw their fates coming and, truly, I didn't see them as villains. They were only acting out what their heritage demanded of them. The witches, however, were definitely villains. The Lilim sister definitely got what she deserved. It was satisfying to see her destroyed and decrepit. Ditchwater Sal was more of a passive villain but I definitely think things ended for her in an acceptable way.

4. Were there any descriptions, characters, settings, plot threads that stood out to you personally during this second half of the book?

The idea of Tristran and Yvaine ending up on a cloud and then being picked up by an airship? Amazing. And then this description of being on the clouds --

"Looking out over the world from above, he could never remember feeling so alive as he did at that moment. There was a skyness to the sky and a nowness to the world that he had never seen or felt or realized before."

5. At the very end of the book we see that Tristran and Yvaine's relationship and fate echoes that of Aragorn and Arwen from The Lord of the Rings. If this question makes any sense to you (lol), what comparisons and/or contrasts do you see, especially in the fates of Yvaine and Arwen?

Love is stronger than death, I suppose. However, Arwen chose to give up her immortality for a life with Aragorn whereas Yvaine didn't seem to have a choice or a death. She already had lost her position in the sky before she met Tristran and she retains her "sparkle" and immortality even as the years pass. I think that Yvaine's situation is much sadder than Arwen's.

6. What are your overall impressions of the story now that it is done?

I liked this book the first time I read it but now I think I love it. It's a perfect balance of fairy tale and adult story with actually quite realistic events and consequences when you think about it. Tristran ends up with a damaged hand, Yvaine retains her limp. There's no perfect ending but there are plenty of perfect moments.

7. If Gaiman were to return to Wall/Faerie, would you take another journey there? If so, are there any adventures hinted at in Stardust that you would like to see Neil expand on?

I would love a story about the lightning collectors. I'm curious about Mr. Bromios' story too. The modern day Wall story that Neil was originally going to tell doesn't interest me as much though but I'm sure I would read it (and probably love it).