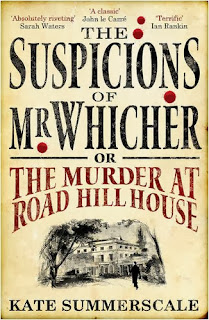 I finally read Kate Summerscale's The Suspicions of Mr. Whicher! I've had this on my TBR since it came out in 2008 and though I had heard of its easy readability, I just never got around to picking it up. But, as I'm behind on my non-fiction reading for the year, I grabbed this one a week or so ago.  It's the story of a young boy who is murdered, apparently in his own home and probably by a member of the household. The investigating detective from Scotland Yard is Jonathan Whicher and this is the story of the case, his investigation and the effects afterward on both the family and the detective.

While this was an interesting book which filled in a bit more of my Scotland Yard knowledge, I thought some parts were a bit info-dumpy, especially right at the beginning. Still, it was a compelling piece of history, especially reading about how the murder became so popular in England, dominating the newspapers for a long stretch of time and inspiring writers such as Wilkie Collins. 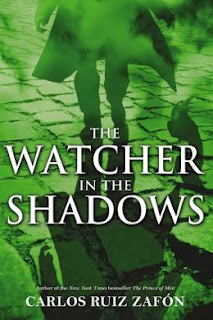 I wasn't going to buy any new books for RIP this year but then there was this new Carlos Ruiz Zafón novel (new in translation anyway) and I couldn't resist. The Watcher in the Shadows is his third YA novel from early in his career. It is an incredibly atmospheric and melancholy book with a terrifying villain. I was in doubt as to whether many of the characters would even survive to the end of the book. I think it's amazing how CRZ can take the most elemental of fears and turn them into such imaginative and unique stories. All of his YA books are well worth picking up if you're looking for suspenseful reads. I saw that Simon got a copy of the fourth in translation, Marina, just recently so I guess that will be on my RIP plate for next year!

Finding the real and the fictional equally disturbing,
K
Posted by Kristen M. at 9:38 PM