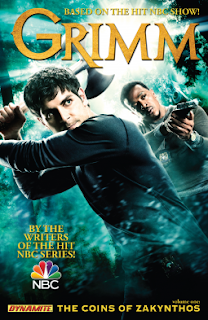 During read-a-thon, I tried out the first volume of the Grimm graphic novel, based on the NBC television show. I'm a pretty big fan of the show and had been missing it all summer long so I was hoping for a fun read. And, while this collection was a bit repetitive (they didn't edit out recaps between issues when combining them for this book), the story was indeed fun and the characters were exactly like their television counterparts. If you don't watch the tv series, I think there was still enough character introduction at the beginning that you wouldn't be lost but I do think that this will likely be more interesting for existing fans. 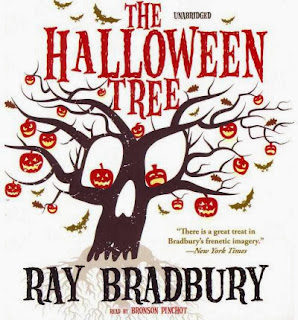 I also wanted to grab an audiobook for the read-a-thon but, while I didn't get to it during that day, I didn't want to miss this chance to get more familiar with Ray Bradbury through The Halloween Tree. I listened to it over the past week or so and really enjoyed this tale that is part history lesson about the cultural origins of Halloween and also a harrowing tale of a young group of friends that must rescue one of their own. I did have to rewind and re-listen at one point after one small idea by Bradbury sent me off on a thought tangent about gods for about five minutes! His word choice is amazing and the flow of his prose is magical. As for the narrator, I thought Bronson Pinchot was engaging and easy to listen to but sometimes his kid voices were a little whiny.

Here's a preview clip for the 1992 Hanna-Barbera animated film version. It looks like the drama has been ramped up a bit!

Enjoying Halloween in many ways,
K
Posted by Kristen M. at 9:45 PM