A Visit (or Two) to Dickens Junction

Recently I was offered a book for review that turned out to be the second in a series and was also based on a book I hadn't read yet but wanted to. So thus began my reading project of the last month or so. 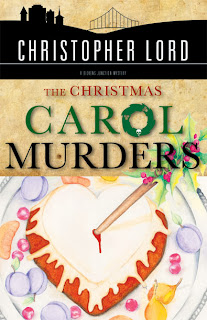 First up was, logically, the first Dickens Junction Mystery, The Christmas Carol Murders by Christopher Lord. I was excited about reading this one. It promised many elements that I enjoy -- a cozy mystery, a beautiful Oregon setting and a tie-in to a well-known story from one of my favorite authors.

Dickens Junction is a fictional town just outside of beautiful Astoria, on the northern coast of Oregon. It was founded by the main character's uncle, Ebenezer Dickens, as a place to celebrate the life and philosophies of his ancestor, Charles Dickens. Simon Alastair was adopted by his uncle after he lost his parents and he grew up in this small community. But now he's a wealthy heir and benefactor to the town -- and he also runs the town's bookstore, Pip's Pages. But one day Mervyn Roark, an acquisitions man for a mysterious company named Marley Enterprises, comes to town and buys an Ayn Rand book from the store, and thus begins a battle between the benevolent philosophies of Dickens and the more uncharitable ones of Rand.

Though this book would be filed as a cozy mystery, it really is a tale of tolerance and friendship, from the fledgling romance of the main character (who happens to be gay) to the support each community member offers up when the big bad corporation comes to town. Whether this is more of a commentary on small towns or on the philosophies of Dickens, I'm not entirely sure, but I did enjoy this aspect of the book. It made me immediately want to travel south and find this town. As for the murders, the victims were predictable but the murderer was not. And the romance was sweet and not one I would normally encounter in much of my reading so I enjoyed the diversion. My only complaint about the book is that there was just a bit too much description of what each character was wearing in every scene, down to brand names and fabrics. I didn't feel these descriptions added anything to the story and could have easily been edited out. 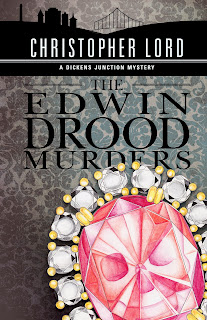 The newly-released second book in the series, The Edwin Drood Murders, posed a bit of a problem for me. I hadn't yet read Charles Dickens' The Mystery of Edwin Drood though it had been on my TBR for a while. Now, these mysteries still work even if you just have a passing knowledge of The Inimitable Boz (Dickens) and his novels but I saw this as a chance to clear another book off my TBR so I read the Dickens first. I'm going to save my discussion of that book for my next post but I will say that it did enhance my reading of this book.

It is a few months after the events of the first book and the United States Chapter (Western Sector) International Society of Droodists is hosting a conference in Astoria. These are scholars and fans of Dickens' last and only half-finished novel. There are a couple of late registrants mixed in with the regular (and still highly irregular) attendees and it isn't long before suspicions develop after some significant thefts and, ultimately, murder.

This was a good follow-up to the first novel. Simon and his boyfriend Zach make sense as a detecting team, one as a trusted local and the other as a resourceful journalist. The Dickens plot is again somewhat peripheral to the mystery but provides an interesting framework for suspicion. There isn't as much of a moral message in this story as there was in the first one but I think it was actually a stronger mystery.

I thought I had seen something about the next book in the series but now I can't find anything about it so I'll have to wait a while longer to see what's next for Simon and the Junxonians. Fingers crossed for Bleak House!

Enjoying a little homage with my murders,
K
Posted by Kristen M. at 9:32 PM