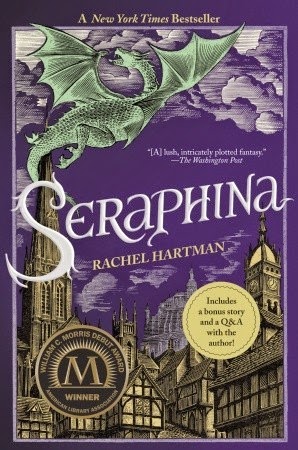 Seraphina by Rachel Hartman. I LOVED this book. I loved this book so much that I want to tell you all to read it right now. You don't have to take my word alone for it either. Ask anyone else who has read it. They'll also sing its praises because it's just that good.

Now you probably want to know what it's about. Well, I'll be honest. It's a little different. It's about humans ... and dragons. But don't let that scare you if dragons aren't your thing. They happen to be dragons that have the ability to change their appearances to look like humans. So most of the time this story is just about people of different races because, really, that's all they are underneath. Some of those people want peace between the races and others can't accept anyone who is different and they actively cause trouble. And then there's Seraphina. She is a new musical apprentice in court and she has a secret that keeps her distant from everyone else, a secret that could change the relations between the two groups. So this is a story about music and identity and it's got a bit of romance and politics and it's just really, really smart. And yes, it has dragons.

I hope that I've convinced a few of you to give this book a try. There is a sequel coming out a year from now so the only complaint I (and others) have is that that date is too damn far away!

Note: This was my first read for the Once Upon a Time Challenge.
Posted by Kristen M. at 12:17 AM