You Said You Would Wait Until the End of the World 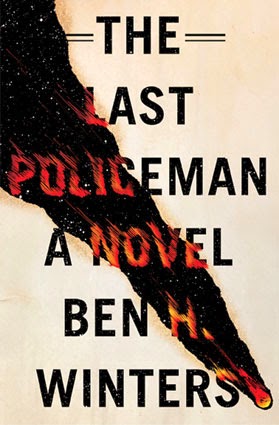 After the joy of strictly reading one of my favorite authors for an entire month, it was tough to choose my first non-DWJ read. I eventually decided to go for something entirely different and chose The Last Policeman by Ben H. Winters (the co-author of Sense and Sensibility of Sea Monsters), first in a trilogy. I chose wisely because this was a wonderful book.

The titular last detective is Hank Palace, a newish recruit to the Concord, New Hampshire detective force. Sadly, his time on the force will likely be short because a massive asteroid is heading toward Earth and they're only six months away from impact. Suicides are on the rise and when Hank gets called to examine a body found in a fast-food restaurant restroom, he's pressured to give this death the same tidy verdict. But he feels that something is off and, even with the imminent end of the world, he is determined to do his job and solve what could be his last murder case.

There were so many layers to this story, from the basic murder investigation to a pre-apocalyptic romance to the more philosophical questions of what to do with the last six months of your (and possibly everyone else's) life. Everyone in the story is some shade of unpleasant for the obvious reasons but, because of the circumstances, they almost all become sympathetic. Hank's dedication to his job is especially admirable but also a bit compulsive which makes him a complex character that you want to learn more about. I read this entire story in one day and can't wait to get to book two, Countdown City, which I have sitting here, and book three, World of Trouble, which comes out in July.

With a glimmer of hope,
K

p.s. I received my copy of this book from Quirk Books in exchange for an honest review.
Posted by Kristen M. at 12:32 AM