The Land of Laughs 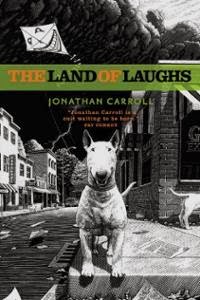 After I read and loved The Ghost in Love by Jonathan Carroll in January, Chris said I had to read The Land of Laughs next because it is his favorite Carroll. It took me a couple of months to buy it and a couple more to get to reading it (I finished it at the end of August) and now it's taken me a couple of months to get around to reviewing it. Normally this would be an issue because I have a very short book memory but not in this case because I literally haven't stopped thinking about it since the summer.
The Land of Laughs is a children's book by author Marshall France and it is Thomas Abbey's favorite book. Abbey, son of a movie star, is obsessed with the late France and his books and eventually decides to visit France's hometown of Galen, Missouri where his daughter still lives in order to research a biography he would like to write about France. What he finds in Galen boggles the mind and blurs the lines between fiction and reality.

It has been three months since I finished this book but I can't stop thinking about it and I already want to read it again. I can't explain exactly why I loved this book so much because it's really rather strange and sometimes violent and disturbing and the relationships are very dysfunctional and it's about books that I can never read. But it's also about the magic that is in the best stories and what would happen if that magic escaped and took form and that's pretty awesome if frightening.

Now that I've read Carroll's first and last (for now) books, I have to figure out which of his middle books to explore. Neil Gaiman recommends all of them so I guess I'll just grab whichever one I see next! I have a feeling that I'll love it.