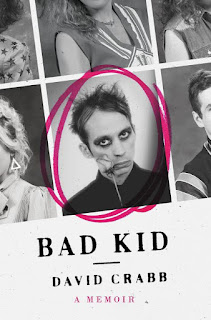 I have a bunch of books that are going to get group reviews as I play catch up again but I thought that Bad Kid by David Crabb deserved its own post. This is Crabb's memoir of growing up gay in San Antonio, Texas. He was bullied before he had even fully realized what set him apart from many of the other kids. The thing he latched onto as a safe and happy thing was music. (Each chapter is headed with a song title or lyric.) And this is the thing that drew me in to his story because we are exactly the same age (well, I'm 8 months older) and we listened to almost all the same music -- George Michael and Madonna, then Erasure and the Pet Shop Boys, and finally The Smiths, Depeche Mode, The Cure, and Nine Inch Nails. But, while I was a relatively innocent Mormon kid, hanging with my besties, going to church dances, and listening to music in my bedroom in a small city an hour east of Los Angeles, he was sneaking out, going to clubs, dodging skinheads, and experimenting with drugs. It was fascinating to see a life so different than mine that was happening at the same time and to the same soundtrack just a few states away. I may not have been able to relate to pretty much anything he went through or did but I still feel like I knew him somehow. We both had specific places we ate lunch with our friends at school, got excited when friends got cool new cars, and lusted after boys that smelled good.

Even if this wasn't your time period or your music, I think there's much to gain from reading Crabb's story, meeting his friends, tagging along to dangerous parties, and seeing how someone who doesn't fit in to the conventional world finds his own place to belong. The story is sweet and funny and frightening and even sad. I was in tears by the end. This is a quick read that would be worth anyone's time to pick up.