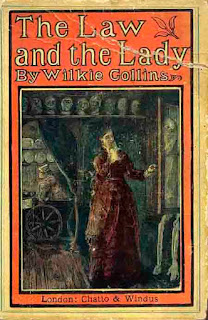 I still have a couple of unread Wilkie Collins novels on my TBR shelves so I decided to pick up The Law and the Lady this season. It is one of Wilkie's later books (1875) and is a thrilling story.

Valeria is an orphan who lives with her aunt and uncle. One day she meets a man who is fishing near her home and it is basically love at first sight. The two quickly get married but, only days later, Valeria finds out that her husband might not be who he says he is. It is therefore up to Valeria to discover the truth.

Yes, this is another super vague description because some of the secrets of the story are revealed quite early and I don't want to give anything away because it's such a crazy, twisty tale. But, as you probably expect from Wilkie by now, there are questions of identity, crime, and, of course, social justice. Valeria is constantly expected to behave in a certain way simply because she is a woman. However, she also happens to be strong-willed and tenacious and this leads to a first-person account that is compelling and ultimately a bit stressful to read! It manages to be smart but insane at the same time and is a great example of Collins' genius with plots and his concern about the Victorian society's treatment of women. I had so much fun reading this book that I will probably choose another Collins to read this winter.