I guess lately I've been in the mood for some non-standard reads. All three of these were fun and quirky and highly original (and all from my TBR -- yay!). 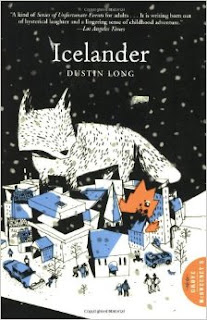 I picked up Icelander by Dustin Long a few years ago at Half Price Books based on the cover and the blurb.

A Nabokovian goof on Agatha Christie: a madcap mystery in the deceptive tradition of The Crying of Lot 49 ... an intricate, giddy romp steeped equally in Nordic lore and pulpy intrigue.

This book was actually one of the ones that had been on my TBR the longest so I decided it was time to get to it. I don't even know how to explain the plot though. There's a real-life adventurer family and a fictional literary account of their exploits and a supernatural Icelandic race that lives underground. The story is told from different viewpoints that weave around a murder and lead toward the revelation of a secret nemesis. It's very strange but also strangely compelling. It reminded me of a Jonathan Carroll novel but more scattered. 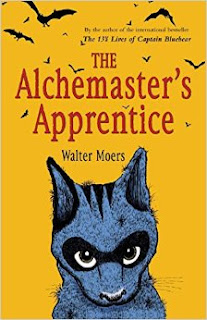 The Alchemaster's Apprentice is a stand-alone novel set in the Zamonian world created by German author Walter Moers. His books are some of my favorite stories ever and this one was no exception. It's the story of Echo the crat (a cat that can talk in any language to any creature) and the countdown to the end of his life. His caregiver has died and he's slowly starving to death until he is taken in by the evil Alchemaster (like a magical tyrant). The Alchemaster promises to fatten up the little crat with the most delicious foods ever imagined under one condition -- at the next full moon, he will be allowed to kill the crat and harvest his fat.

I know this sounds super strange but it's actually a beautiful tale with tons of suspense and action but also lots of thoughtful musing. All of Moers books are incredibly readable so I have to also give credit to his English translator, John Brownjohn. 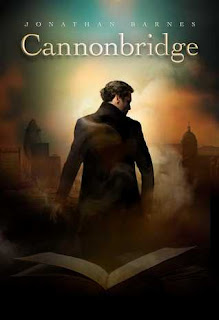 Finally, I happened to be browsing the shelves at my favorite indie, Third Place Books, and they had Cannonbridge featured face-out on the science-fiction/fantasy shelves. It's the third book from Jonathan Barnes, an author that I have greatly enjoyed in the past (you may have heard of The Somnambulist and possibly The Domino Men). This is a book that caters to readers of classics as the titular character mysteriously appears at various times through history to the likes of Byron and Shelley, Dickens, and Wilde and becomes a famous author in his own right. Modern day Cannonbridge historian Toby Judd begins to suspect something is very wrong just as his tidy little life starts falling apart. What follows is an adventure of classic proportions.

This story was not quite as good as The Somnambulist and I think it was because of the ending (which I obviously can't talk about). Still, it was an exciting read and I was happy to find that I was able to identify almost every classic author visited! It also made me want to go back and reread Barnes' other two books which are some of my quirky favorites.

Reading off the well-trodden path,
K
Posted by Kristen M. at 12:19 AM