A Series of Murders 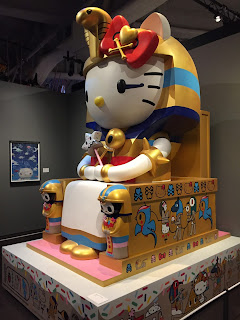 I know it has been a while since I last blogged but I have a good excuse. I was distracted by Kittypatra! She is the centerpiece of the Hello Kitty exhibit at the EMP Museum here in Seattle and she's 10 feet tall. She mystified me and took away my blogging mojo. Yes, I'm sure that's where it went. Anyway, I have a lot of books to tell you about so I'll start today with three books from mystery series -- 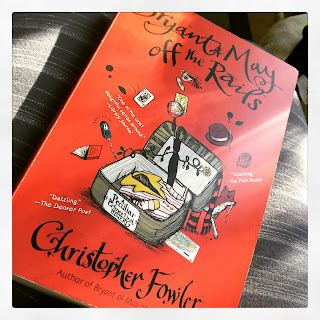 Bryant & May Off the Rails is the eighth book in what is still one of my favorite series. Christopher Fowler brings alive a different aspect of London in each book and this time it was the London Underground with some of its quirks and secrets. This was a tense story as the Peculiar Crimes Division was fighting the clock to solve the mystery, save lives, and also save their own division from being completely disbanded. There are four more books published in the series after this one and, I believe, another one coming out this year so I totally won't feel bad if I binge read a couple more this year. I can never stay away from these characters for long! 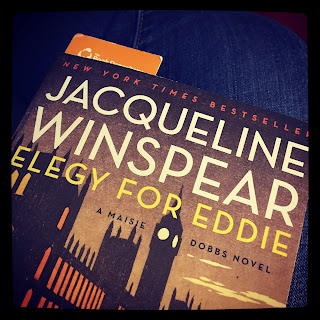 The book I finished most recently was Elegy for Eddie by Jacqueline Winspear, the ninth Maisie Dobbs book. This was one of my least favorite of the series because it was so much about Maisie's internal dialogue and so little about the mystery. It's just not easy to feel sorry for someone having a crisis over having inherited too much money. I did however enjoy the various depictions of the differences between the haves and have-nots of the time. This was definitely a transition book though, both in the things going on in Maisie's life and also in the world as Hitler starts coming to power and WWII looms on the horizon. I anticipate a lot more action in the coming books, especially with the upcoming twelfth book (release date March 29) being called Journey to Munich. 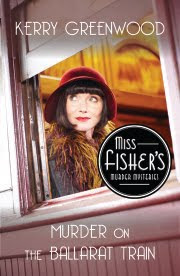 Finally, I read my first Phryne Fisher mystery because I won this copy from Poisoned Pen Press. It's the third in the series but, because I had already watched many episodes of the television show, I didn't feel the need to start from the beginning. It was fun because I had forgotten what happened in the mystery and because it was even more sexy than the tv show. I also love the tie-in cover for once because Essie Davis is so fantastic as Phryne! I definitely saw and heard the characters as they appeared on tv and it wasn't a bad thing at all. I can't wait to dive into some of the other 19 books in this series. I hope that Poisoned Pen does a few more tie-in covers too!


What mystery series are you loving right now?

Getting back on the blogging train (hopefully sans murder),
K
Posted by Kristen M. at 12:53 AM