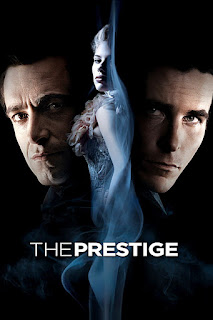 Somewhere around when The Prestige came out on video (Feb 2007), I enthusiastically rented it and watched it. Hugh Jackman and Christian Bale (not to mention David Bowie!) didn't hurt my enjoyment, of course, and I thought it was a smart and intense tale.

Years passed and I finally realized that The Prestige was based on a novel by Christopher Priest and that it was widely acclaimed. I found a gently used copy and it sat on my TBR shelves for a couple of years more. 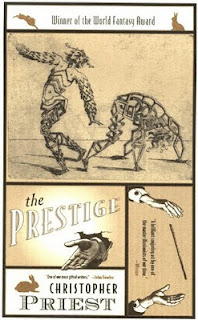 Well, I finally got around to reading it a month or two ago, long after I had forgotten the movie, and what I read was an amazing and powerful story of rivalry and revenge and science gone wrong. The layers of story, from Andrew Westley in modern times, back to the dueling narratives of illusionists Alfred Borden and Rupert Angier, were rich with intrigue and secrets and horrifying truths. It was all I had expected it to be and so much more. 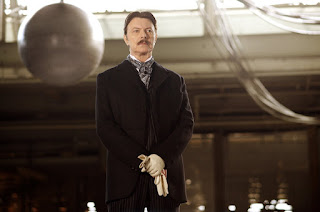 After I finished reading is when it all went wrong. I had the innocent thought "now I should re-watch the movie". The holidays came and I forgot about it until David Bowie passed away. Then I happened to see The Prestige was streaming from my cable company and I hit play. What followed was the most infuriating book-to-movie experience of my life. There was almost nothing in the movie that was the same as the book except for the main character's names! Hubby was less than pleased to have to sit through a movie where I sighed and shouted and raved through the whole thing. I kept yelling "that's not the way it happened!!" Because, not only was it not the same, it was far worse. It took all of the most brilliant parts of the book story and just threw them away, replacing them with totally annoying, pedestrian plots instead.

And so, David Bowie aside, I would strongly recommend that you grab the book and enjoy an amazing read -- and get your Christian Bale fix elsewhere.

Declaring the written word victor,
K
Posted by Kristen M. at 12:20 AM