My Journey to Becoming an Audiobook Listener 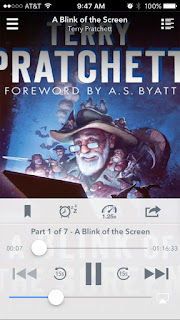 Before September 2013, I hadn't really listened to audiobooks except for a couple of Harry Potters that I had bought for road trips. I was one of those jerky readers that didn't believe that listening counted as reading. I also didn't want to sit at my computer for hours on end and I didn't have a commute. Then came Ready Player One and the discovery of the Overdrive subscription through my wonderful library system. I couldn't resist listening to Wil Wheaton as narrator of an instant geek classic and thus began my conversion.

I have now tried out a lot of different kinds of audiobooks and listening situations. What works for me is this:

1. Middle grade, YA, or genre fiction: I tried listening to Victoria: A Life but I just couldn't keep up with names and timelines on audio. I needed the ability to look at relationship charts and photos. I need plot-driven fiction! I did listen to the Amy Poehler memoir but that was entertainment non-fiction, not the learning type.

2. A narrator with a good accent and good representation of various characters: I tried a theater group performance earlier this year and they were just too dramatic for me. There was also a Judy Blume book that I listened to where the adult narrator just made all of the kid voices whiny. It was awful.

3. The ability to listen on 1.25x or 1.5x: I am impatient and I don't want a book to last more than a few days. There have only been one or two times that I couldn't understand the narrator when I sped up a book.

I started by listening while taking walks and then added in some time during housework and yardwork, when settling down for a weekend nap, and finally just while sitting in the sun on a beautiful sunny afternoon. I've even been known to listen to the end of a great story through an entire evening.

A few of my favorites so far have been:


The Halloween Tree by Ray Bradbury, read by Bronson Pinchot
Bud, Not Buddy by Christopher Paul Curtis, read by James Avery
The Night Circus by Erin Morgenstern, read by Jim Dale
Because of Winn-Dixie by Kate DiCamillo, read by Cherry Jones
The Wee Free Men by Terry Pratchett (and all the other Discworld books and Nation and Dodger -- all read by Stephen Briggs)
The BFG by Roald Dahl, read by David Walliams
Howl's Moving Castle by Diana Wynne Jones (and other titles), read by Jenny Sterlin
Island of the Blue Dolphins by Scott O'Dell, read by Tantoo Cardinal
and Neil Gaiman reading any of his own books

One of the best things I've found about audiobooks is that I can actually listen to one book while having a different physical book in progress. I used to be a monogamous reader but now I have fun dipping into multiple stories through different mediums. Somehow, I'm able to keep the stories separate this way. The only thing I'm apparently not able to do is remember to review my audiobooks because they don't end up on my review stack. Oops.

Do you listen to audiobooks regularly? Do you have a favorite that I should try?