After hours of walking around my neighborhood (not all at once!), I've finally just finished listening to the third book in the Apothecary trilogy by Maile Meloy. Since I walked through all of these books in just a couple of months, I can talk about them together today! 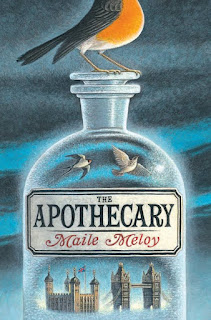 First of all, I highly recommend the audiobooks, narrated by Cristin Milioti. She is so good at doing the various voices that sometimes I would forget that it wasn't an ensemble performance. The Apothecary follows Janie Scott, a young American in 1952 whose family has fled to London after her Hollywood writer parents become targets of the McCarthy-era Communist witch hunt. She meets a boy at school, Benjamin, who happens to be the son of the kind apothecary near her new home. What Janie doesn't know is that Benjamin's father isn't a regular shopkeeper and that she and Benjamin are about to become tangled up in a race against time and the threat of nuclear war. Luckily, they have the weapons of science and nature to fight the poison the Russians are preparing to unleash on the world. 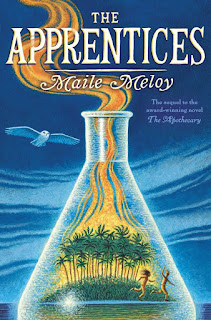 The first two books in the series fit together perfectly, with The Apprentices continuing the fight against those who are attempting to escalate the Cold War toward a nuclear end. In this book, however, Janie and Benjamin have been separated and are trying to find each other again. Janie is fighting against her need to prove herself and Benjamin is simply focused on reuniting with her. 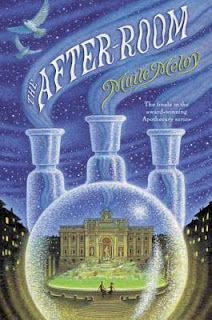 And finally, in The After-Room, the teens have to deal with the consequences of their actions in this dark tale of loss. But, whereas the first two stories are based on the idea that there is a secret association of apothecaries/scientists/herbalists who understand the power of science and nature in such a way that it seems that they can do magic, the third part all of a sudden brings in real magic with no explanation. It was a very strange direction for the story to take and I didn't enjoy it as much as the original premise. However, I still highly recommend this trilogy, although for a slightly older reader than the middle grade audience it's marketed toward. Some parts are very dark and violent and there's a lot of relationship stuff that I'm not sure 10 year olds need to be reading about.

Believing in the magic of nature,
K
Posted by Kristen M. at 12:16 AM