On my post about Discworldathon, Lory and I were going back and forth in the comments about which Pratchett books we could focus on for this year's March Magics event. She suggested the Death books as nobody else on the schedule had chosen them and then, all of a sudden, I had a super fun idea!

(Sidenote: If you've somehow missed this event I host annually, DWJ March began in March 2012 as a celebration of Diana Wynne Jones and last year I added Terry Pratchett as he had passed the year before. I changed the name to March Magics but a few of us didn't want to let go of the DWJ March name so now it kind of has two names. I guess this is the 6th year of the event!)

I've wanted to focus DWJ March on Chrestomanci for a while and there are four main books and they happen to be about nine-lived enchanters. When paired with four of the five DEATH books (I'm skipping Hogfather since it will have its own celebration in December), we end up with ...


A Matter of Lives and DEATH 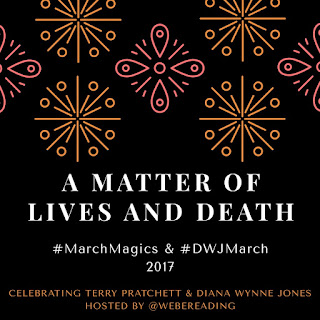 (My alternate event name was The Lives and DEATH Brigade ... Anyone #teamlogan out there?)

To give all of you enough time to dust off personal copies, shop, or get your library holds in on all eight books, here's the basic schedule:

Week 1: Charmed Life and Mort
Week 2: The Lives of Christopher Chant and Reaper Man
Week 3: Conrad's Fate and Soul Music
Week 4: The Pinhoe Egg and The Thief of Time

I'll post the actual dates for each book around the middle of February. Also, I would love to have guest posters to share thoughts, come up with discussion questions, or whatever else you think would be fun to do with any of these books. If you're interested in being in charge of one or more of these books, let me know in the comments or send me an email.

Are you excited about the theme this year? Will you try and read all eight books? How many will be rereads? (Seven of the eight will be rereads for me and I'm so excited!)

Feeling the magic building up,
K
Posted by Kristen M. at 12:30 AM