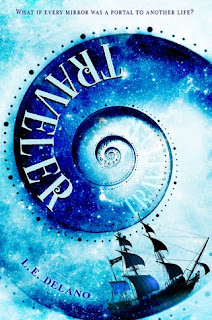 Traveler by L.E. DeLano was released a couple of weeks ago and is the story of Jessa, a girl who is having very vivid dreams of a boy that she doesn't even know. When she finally sees him one day in real life, she isn't quite sure how to react -- especially because moments later, he saves her from certain death. It turns out that the boy, Finn, is from an alternate reality and can travel through mirrors. He's come to tell Jessa that she can do the same ... and that Jessas in other realities are being killed. Whether he can save her in this world depends on if she can trust him and figure out who is out to get her and why.

This book is part of Feiwel and Friends' Swoon Reads crowdsourced imprint. I'm glad that DeLano finally got her chance to be published because this was a compelling story. I loved the idea of travelling to parallel universes by trading places with the "you" in that place. The peril in the story seemed real, the mystery was complex, and the characters with disabilities or struggles were portrayed honestly but with sensitivity. I especially appreciated that a variety of kids were shown who were on the autism spectrum because it is indeed a spectrum. I did have a bit of trouble siding with Jessa because she was all over the place and not always in a tolerable way. Also, there was no indication until the very last moments that this was going to be the start of a series and it had very little closure. It seemed like the middle of one big story instead of the end of the first chapter of that tale, if you know what I mean. I'm not sure if I will look for the next book in the series but I did enjoy reading this one overall. 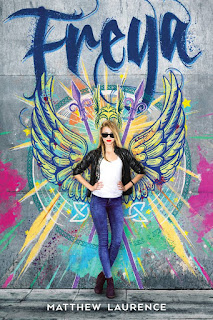 Freya by Matthew Laurence will be out in mid-March (but I'll be busy then so I'm mentioning it early) and is pretty much an intersection between one of my favorite books, American Gods, and one of my favorite t.v. shows, The Librarians. As you can guess from the title, this is the story of Freya, Norse goddess of love and war, and where she is now -- a mental hospital in Orlando, Florida. She's been hiding out voluntarily for decades, weakened from a lack of belief and weary from being around for a thousand years. She still has value to someone though because a man shows up, offering her strength and believers, if she will only come and use her skills to help the corporation he works for. She refuses and immediately becomes a target for destruction. Her only chances for survival are the acquisition of a high priest, Nathan (who she abducts from the hospital), and the will to overcome her own godly nature.

With just a few iffy descriptions (ie., lots of throwing around of the word "crazy" at the beginning of the story in the hospital) that may have gotten fixed before the final version, this story was incredibly fun and action-packed. Freya a.k.a. Sara was a great main character and I really enjoyed exploring her inner self. The tie-ins to Walt Disney World were amusing and the other gods were varied and interesting. Even the villains had some depth to their characters, which made for a more satisfying read. There was also a nice mix of magic and technology, of ancient and modern.

And unlike in the other book, it became apparent at just the right time in this story that it was the first in a series and I couldn't be happier. Laurence could only introduce so many gods in this book and there are many more that I'm now dying to see in a modern setting. I also wouldn't mind if this got picked up and made into a movie because there are so many strong females and good magic and action in it! However, I would want Freya to be played as a curvy and beautiful size-10, the way she is described in the story, and not as the svelte girl the publisher chose to put on the cover. (Sorry, svelte girl.)

Transporting and transfiguring,
K
Posted by Kristen M. at 12:39 AM