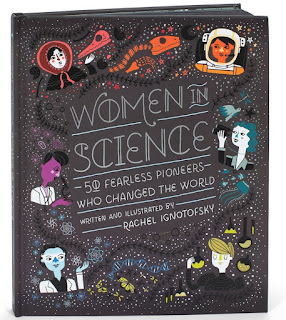 Women in Science: 50 Fearless Pioneers Who Changed the World by Rachel Ignotofsky is one of the books that is showing up everywhere right now. I see it recommended for kids and adults alike and the brief summaries and bright colors make that possible. It both highlights women's contributions to science AND the obstacles that they faced as they did so, giving readers knowledge and food for thought. 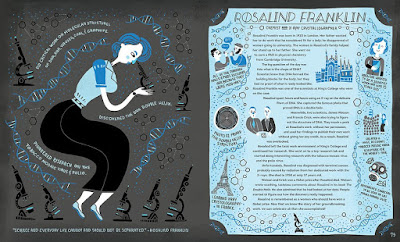 I did have two complaints about this book -- one is that there were too many spelling and "autocorrect"-type mistakes in the text and artwork. As a scientist, this lack of precision was off-putting. The second thing is that two or three of the scientists' bios mentioned worked on the atomic bomb and their work was described in ways that basically praised the end product. I have a problem with this kind of talk no matter what the gender of the scientist is. To have it right next to the bio of someone like Rachel Carson, whose hard work and dedication led to things like the formation of the EPA, is not cool. All science is not equal.

Still, this is a great book for showing the variety of professions that make up the sciences and the struggles that women have had over time in being allowed to work in them and to also have their work recognized. Hopefully more in-depth biographies of many of these women will be written by young people who read this book and other youngsters will be inspired to pursue studies in the sciences.

Never pipetting by mouth,
K
Posted by Kristen M. at 12:50 AM