#RIPXII 18: New Release: Race to the Bottom of the Sea 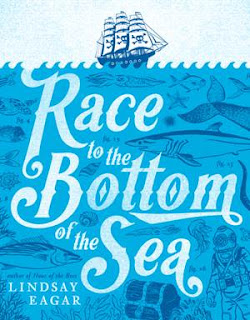 Even though Z is starting to transition out of middle grade books, I still love reading them -- especially when I come across a new gem like Race to the Bottom of the Sea by Lindsay Eagar (released earlier this month by Candlewick Press). The story starts peacefully with eleven-year-old Fidelia Quail out on a boat on the last day of the season, looking to tag sharks, while her parents are down below in a submersible that she designed and built herself. However, it quickly turns dark when a big storm blows in and her parents don't make it back to shore. Fidelia barely has time to grieve before she is kidnapped by pirates because of her ocean expertise and inventing skills and is forced to help them in their search for lost treasure.

So ... wow. I was honestly shocked by how dark and bleak this book got. One specific story line had an inevitable tragic ending with no hope of change offered at all. There was another whose best possible outcome was still incredibly heartbreaking. And this story did not have jovial, cartoony pirates. They were weather-beaten and disciplined and, quite frankly, usually heartless and self-serving. I was surprised by all of this but also impressed that Eagar didn't water the tale down (bad ocean pun). But all of the dark stuff also helped Fidelia's bravery and intelligence shine brighter. She also made me regret not being an active marine scientist. Damn that mal de mer.