A Stack of Eight 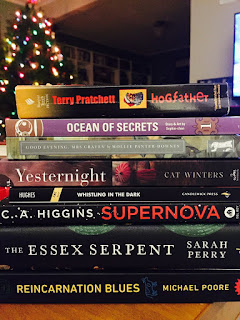 As the holidays approach and I get closer to having houseguests, I keep looking at all of the things that need to be tidied up and my stack of unreviewed books taunts me from the coffee table. Five of these are review copies too (as I've been trying to pare down yet another stack in another room) so I NEED to tell you about them. I don't know if I'll get to full reviews but I want to at least give these all a mention so here goes --

Reincarnation Blues by Michael Poore
I actually finished this story (of a man nearing the end of his reincarnation limit) at the beginning of November but could never figure out just what to say about it. There were things I liked about it and a couple of things that I didn't but it had me thinking for weeks about reincarnation and death and many other things. My spreadsheet note says "all over the place but mostly in a good way".

The Essex Serpent by Sarah Perry
This was more of a character development book than a plot book and I enjoyed meandering through it. There was also a feeling of sadness about the whole story. The main character was incredibly damaged and that followed her everywhere.

Supernova by C.A. Higgins
This is the second in a trilogy and it was ridiculously dark and, quite honestly, painful to read but it inspired a lot of thought about rebels and revolutions and the cost of bringing down an empire. I definitely want to finish the trilogy but I'll need a bit of a break before I dive back into the darkness.

Whistling in the Dark by Shirley Hughes
I adored this story of children in Liverpool during the Blitz. Hughes was a young woman during WWII and her experiences definitely come through and give this story depth and authenticity.

Yesternight by Cat Winters
This one was weird. It was atmospheric and bizarre and I'm not sure I liked the ending.

Good Evening, Mrs. Craven by Mollie Panter-Downes
These WWII homefront pieces that were originally published in The New Yorker were almost all from points of view that I had never read/heard before. Some of them were rather depressing, others inspiring. Again, it was educational and entertaining to read a different point of view that usual.

Ocean of Secrets, Vol. 1 by Sophie-chan
This is Sophie-chan's first manga and she says she has been working on the story for years. It is a good twist on the secret-princess story. The second volume comes out in a couple of months and I think this will be a fun one to follow.

Hogfather by Terry Pratchett
And this one was a bit hard to get into for some reason. By the end I enjoyed it but I think that there are other better books in the Death series. However, there were also a few things in it that I loved -- like the scenes with the wizards. They were especially funny this time.

Well, now I get to put all of these books away and make room for presents. Yay! If there's one you want to know more about, let me know in the comments and I'll write a real post in the new year.