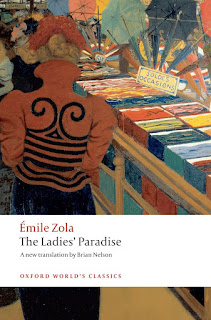 I can't believe I've already read my first book for the Back to the Classics Challenge and that it is one that has been languishing on my TBR for a few years at least. What a satisfying feeling!

For "A Classic in Translation", I chose The Ladies' Paradise by Émile Zola, published in France in 1883 as Au Bonheur des Dames. It is the eleventh book of Zola's Rougon-Macquart series but is able to be read as a stand-alone. The book before it features one of the main characters but at a different phase in his life. As this was a purchase based on watching the television show The Paradise, I wasn't aware of the full series until later.

Basically, the main character in the story *is* the Ladies' Paradise, one of the first department stores -- based on the real Le Bon Marche but created as a rival store. Many of the pages of the story are dedicated to describing both the building and the eye-catching displays of household products and clothing. Its owner, Octave Mouret, is a widower and is the mastermind behind the undertaking. Denise Baudu is a newly-orphaned 20 year old who has two younger brothers to support. When the older one, Jean, gets an apprentice job in Paris, Denise moves the family and finds herself at her uncle's shop, across the street from the amazing Paradise. She quickly gets herself a job there and we follow Denise, Mouret, and many other characters through their interactions with each other and with the store.

This particular translation was clear and easy to read. There was just one sentence that stood out to me and made me question if Brian Nelson added anything else to the text. It was "[t]his was the embryo of the vast trade unions of the twentieth century." As the book was published 17 years before the twentieth century and Zola died only two years into the century, he would have had to have been Nostradamus to have written this sentence.

As for the story, I didn't fall in love with any of the characters, especially since quite a few of them were rather flawed, sometimes even loathsome. They, however, had no problems falling in love with each other, creating quite a messy (in a mostly good way) story. Regardless, I enjoyed the journey beside them and the explorations into Parisian culture and commerce. I truly felt disappointed that the heyday of the department store was before my time. Even just as a historical artifact, this novel preserved something special.