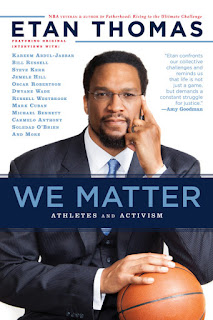 Out in just a week or so, We Matter: Athletes and Activism by Etan Thomas is a collection of thoughts and interviews on athlete activism and also the issues that they have to be vocal about. Thomas, a former NBA player, speaks of his own education and mentoring and how it led to his ability to speak out when things in life were unfair or unjust. He covers everything from the Black Lives Matter movement to education to the unique barriers facing Black girls and women.

This isn't normally the kind of book I pick up because of the strong emotions involved but, as a big fan of the NBA (I'm actually watching a Lakers game right this moment) and with the recent crappy talking-head comments about how LeBron James should just "shut up and dribble", it seemed like this was meant to be in my hands right now. And I really ... well, enjoyed is not the word is it when you're talking about systematic racism and police brutality and other such topics ... appreciated the chance to learn and think and explore with Etan Thomas. The variety of people he chose to interview was helpful to presenting a well-rounded discussion and I enjoyed hearing from individuals that I "know". Still, there is not really any barrier to this book also being accessible to readers who are not sports fans.

The first few interviews were very tough to read, those with the siblings or children of Trayvon Martin, Eric Garner, Terence Crutcher, and Philando Castile. These are all unarguably some of the most heinous, pointless murders of innocent people in recent history. To think of the losses from the points-of-view of the family is heartbreaking. It was also the perfect way to start the conversation about the ability of athletes to speak out about these sadly unpunished crimes in their hometowns or cities of play, whether by wearing hoodies or "I Can't Breathe" tee shirts or by participating in marches and panel discussions. I appreciated how Thomas spoke to athletes and coaches/CEOs from the NBA, WNBA, and NFL because each league has different audiences and different levels of receptiveness.

One thing that really resonated and stayed with me was when Thomas would talk about raising his own children and the children he coaches in basketball. I had to re-acknowledge over and over how privileged I have been to be able to keep my white son sheltered for so much longer in life than Thomas was allowed to do with his Black children. My heart broke at the young ages at which he already had to be talking to them about interacting with the police and other authority figures. This is something I can't ever afford to put to the back of my mind.

Finally, I really came to understand how "Black History" is not just about Washington Carver and Rosa Parks and Martin Luther King, Jr. It is about everything that happened up until yesterday. It is the entire span of time and actions that determine the life (and, sadly, death) of each Black person today. It is being aware of the contributions, challenges, and needs of a community that still must fight to be integrated into the country that they helped build. We each need to take a part in keeping these issues in current discussions and we should thank the athletes who sometimes risk their entire careers to do just that.