During last weekend's Dewey's 24-Hour Readathon, I chose to read three YA graphic novels that all coincidentally ended up being about diversity, self-acceptance, and friendship. They are all also from the stellar publisher First Second Books (not coincidentally since they're review copies that I received at various times). I highly recommend all three! 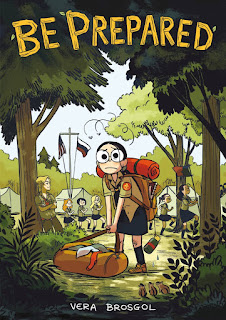 The first is a new release -- Be Prepared by Vera Brosgol. This is a semi-autobiographical story based on Brosgol's own childhood as a Russian immigrant in the U.S. Vera has trouble finding her place with her American peers and thinks that the Russian camp that a fellow Orthodox churchgoer attends will be the place that she finally feels at home. Of course, things don't go quite as expected and Vera has to decide if she wants to be popular or be herself. 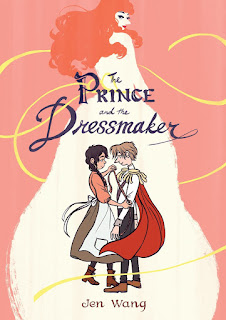 The second is also from this year and it is The Prince and the Dressmaker by Jen Wang. This one tells of Frances, a young but up-and coming dressmaker and designer who gains a very influential but secretive customer -- Prince Sebastian, who ventures out at night in his mother's cast-off dresses and a wig -- the clothing in which he feels most comfortable. Once he hires Frances, he creates his Lady Crystallia persona and gains confidence because he is clothed in such beautiful dresses. Of course, obstacles come up that threaten the happiness of both characters and so we must watch as they go through both the good and bad consequences of being different. 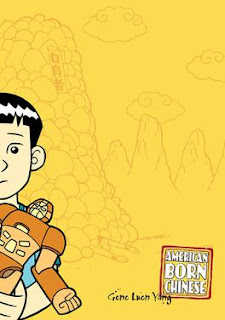 American Born Chinese, by Gene Luen Yang, is from 2006 and it begins as three separate stories--one modern, one ancient, and one seemingly fictional--that come together to provide a story about accepting oneself as a member of multiple cultures.

Each of these stories left me feeling like I understood someone a bit better and, through that, would be able to more easily consider other people's stories in the future. And, as some of the biggest challenges facing our nation right now are due to the intolerance shown by those who are unable to understand or consider the stories of others, be they different in lifestyle or culture, it is essential to get books like these into the hands of young readers. I will be setting them out for my teenaged son and nieces to explore this summer.

Email ThisBlogThis!Share to TwitterShare to FacebookShare to Pinterest
Labels: graphic novels, YA fiction