We Are Legion (We Are Bob) 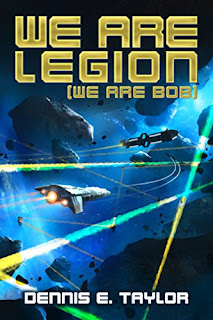 I wasn't going to write about Dennis E. Taylor's We Are Legion (We Are Bob) because I thought I simply went on a frivolous sci-fi bender (starting with Artemis by Andy Weir) and was just reading for pure entertainment. Well, that was true about the first book, but I haven't been able to stop thinking about the Bobiverse. In fact, there was some minor thing in an episode of the new Netflix version of Lost in Space that made me press pause and have a ten minute side discussion with my husband about future technology options that I had started considering while reading this book.

I heard about this book when I was talking to a bookseller at one of my local indies who said "I shouldn't be doing this because I am supposed to be selling books, but there is this great series that you might like and it's really hard to find so you'll need to get it from the library." Well, I put it on my list and then recently activated the hold when I needed a fun read. That bookseller didn't steer me wrong. The premise of this book is that a tech company millionaire decides to participate in a program that freezes brains when you die until mental transplantation into nice, healthy bodies is possible in the future. Well, the freezing happens much faster than Bob expects when he is hit by a car soon after signing up. The next thing he knows, he is waking up in 2133, property of a fundamental religious government who thinks his disembodied consciousness is an abomination but still wants to use it to run a very complex system -- in this case, an interstellar probe to look for habitable planets. One of the abilities of the probe is to replicate itself and its operator, therefore precipitating the galactic proliferation of Bob.

This seems like such a nerdy book premise and, of course, it has definitely got lots of geeky pop culture references (only the "original" Bob wants to be called Bob so all of the others have to choose their own names). But it is also very thought-provoking when it comes to deciding how we as a species (or really, the representative intelligences we send out) should interact with the universe and any other life we find out there. It also feels very current in exploring problems like nuclear proliferation and climate change.  It even explores what constitutes a "real" person. I have been thinking about all of this and more for weeks. I can't wait to continue on to the other two books!