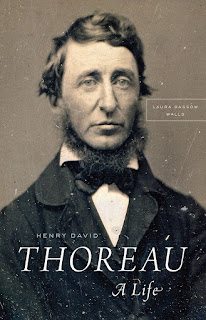 At the beginning of the summer, I made some reading plans that included spending quality time with Henry David Thoreau. Well, it took me almost all of August but I finished! 500 pages of biography and 300 pages of rambles and rambling later and I am safely on the other side. My verdict: I'm on the fence about Thoreau the writer but Thoreau the man was well worth meeting.

I started with Henry David Thoreau: A Life by Laura Dassow Walls and read through his childhood and young adult years, up until his sojourn into the wilderness ... one mile away from his parents' house. 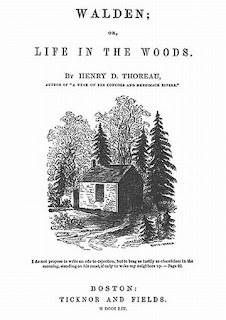 I then spent a ridiculously long time reading Walden. I couldn't get through more than a few pages a day because his writing and thoughts were so dense. It certainly wasn't as tedious as I remembered from high school though. It was just grounded in a strong knowledge of the classics and world religions and those were things that I hadn't been exposed to at the time. But many of his thoughts were simply truisms, like this bit from the chapter called Reading --


It is not all books that are as dull as their readers. There are probably words addressed to our condition exactly, which, if we could really hear and understand, would be more salutary than the morning or the spring to our lives, and possibly put a new aspect on the face of things for us. How many a man has dated a new era in his life from the reading of a book.

After Thoreau's two year, two month, and two day experiment ended, I headed back to the biography and that's when I really started enjoying myself. Thoreau's views on slavery, war, Native Americans, and evolution were all progressive and his actions were sometimes just as brave. When he escorted escaped slaves to trains bound for Canada or when he was the first to speak out nationally in support of John Brown after the Harper's Ferry uprising, he showed his true character. And when his first thoughts after reading Darwin's Origin of the Species were that all men truly were created equal and that the ranking of the races had no actual basis in nature (as was claimed by pro-slavery jerks), I couldn't help but become one of Thoreau's biggest fans. His thoughts on conservation and natural spaces and even hunting were just the icing on the cake. I'll admit to shedding quite a few tears when he died at the age of 44 from tuberculosis. He could have done so much more with the other half a lifetime that he was denied.

I am very happy that I decided to take on this project this summer and I will read more of Thoreau's writings, especially Civil Disobedience, in the future. And I can cross another book off my high school dislike list too! Dare I try a reread of The Grapes of Wrath next?! Haha.