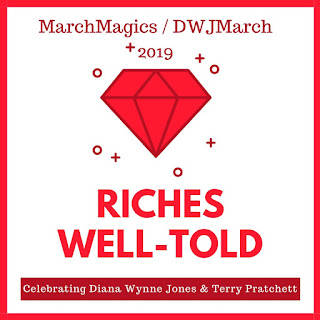 Thank you all for voting on the Pratchett Read-Along book for next month! Sixty percent of you chose The Wee Free Men so that will be our group read. And I've decided to do that one first so that the rest of the month remains open for those of us that want to keep reading through the Tiffany Aching series.

The schedule for the Read-Alongs:

I'll have a post up on each day but also feel free to write your own blog posts and/or share the book on other social media. I'll probably also have something up on Instagram and Twitter each day.

And, speaking of Howl, did you know that this year is the 15th anniversary of the Hayao Miyazaki movie version?! It will be the first film shown for this year's Studio Ghibli Fest at the beginning of April, if you're interested in seeing it in a theater (and are in the U.S. or Canada).


Are you going to join these group reads? Will it be your first time for either book or are they already favorites?