"My father had a face that could stop a clock." 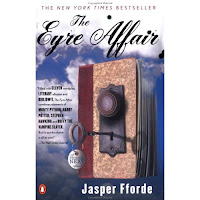 If you don't know about the Thursday Next series by Jasper Fforde, you need to discover it. It started with The Eyre Affair in 2001 and has included four more books: Lost in a Good Book, The Well of Lost Plots, Something Rotten and Thursday Next: First Among Sequels.

The first book introduces us to Thursday Next, a sort of government agent, who initially works in the "Literary Detectives" division of the British Special Operations force and eventually works in the books themselves. We get to meet fictional characters like Mr. Rochester (of Jane Eyre fame) and Miss Havisham (from Great Expectations) as Thursday finds that she can actually travel into books. Unfortunately, she's not the only one that can do this and not all of the others who can have good intentions. Over the next four books we follow Thursday as she hides from psychopaths and corporate miscreants in the book world, fights vampires and ghouls with her friend Spike in the real one and has a son -- a major challenge in itself.

Jasper Fforde is a fantastic writer who has a sense of humor similar to Douglas Adams -- extremely silly and hilarious. He's very big on word play and double entendres when naming characters. The book is set in a slightly alternate universe in the 1980s where people travel by airship, croquet is a national sport (and quite a violent one at that), cheese is a black market commodity and a major corporation controls most of the government. The stories move quickly and they are some of the few books that actually make me laugh out loud each time I read them -- and I have re-read them many, many times. So take a chance and read them at least once ... you won't regret it!


Buy The Thursday Next Series

on Amazon or find them at your local bookstore.
Posted by Kristen M. at 12:20 AM